World of Warships: do you want to command a virtual fleet?

World of Warships is a free-to-play MMO that revolves around fighting sea battles with opponents. Published in 2015, still enjoys a reputation among players.

After World of Tanks’ success, it was only natural that the developers would expand on their library. This saw the release of another game called World of Warplanes and, finally, World of Warships.
Like the other games from Wargaming, the game is centered on warfare that replicates a WW1/WW2 type of atmosphere and is focused on naval combat entirely. The game was fairly successful and managed to have two additional versions released for the PlayStation 4, Xbox One, and iOS – expanding its player-base further, although without cross-play.
The game is certainly one of a kind and is filled with different things to do. So, are these things any fun to do? Let’s find out.

World of Warships has several different ways to play. The PvP mode is the most populated one, where ships go against each other as a team and try to win the battle. There is a cooperative mode where you fight bots with other players, and finally, there is a traditional PvE mode where you and your friends fight more advanced versions of threats.
That’s not all. There are two competitive modes for people who like to take things to the next level as well, which have a seasonal structure just like any other game with a ranked mode. The game’s progression system feels rewarding enough. You have to play the game enough until you unlock modules for certain battleships. Then you move onto the next one once you have completed the one currently in use. 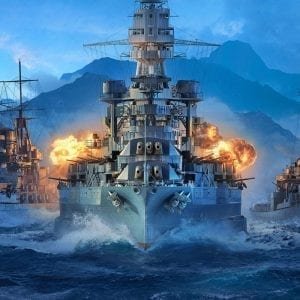 The earlier ships are a bit simple, but the gameplay gets more intense as you unlock stronger ships. When you achieved that, you are matched with enemies who have ships of a similar level. There are many different battleships, which all have different statistics, how they function, and advantages. Some of the ships are given out on specific events, while some have simply been bonuses for playing in the beta at a time.
For people who like to keep themselves even busier, the game features combat missions, challenges, and campaigns that you can play through. You earn small rewards as you go, which help you expand your collection and buy the things wanted from the in-game store.
As expected by developers, the ships are very well-made with great accuracy to real life – with the models look gorgeous and varied. And, of course, there are cosmetic items too for the battleships to keep things varied. This is further extended by the game having seasonal events, such as a Halloween one.

World of Warships nails the detail within the gameplay in every way. The battleships feel exactly as they should. Whether it’s about the precision of the guns, the weight of the movement, or how it interacts with the sea and the general environment. The polish is amazing, contributing greatly to the overall experience.
One of the most important things to know about this game is that it’s a team effort. You can play without friends, but you won’t get very far with a solo act. The game relies heavily on the entire team contributing to each other. If you want to win, and an uncooperative team will lead to inevitable failure.

The game has four different types of battleships, which essentially act like classes. Those are destroyers, cruisers, battleships, and aircraft carriers – with submarines being an addition that was added later on. The different types of ships have different types of gameplay. All of them need to work with each other within every match to have a proper chance at winning. Especially since the game’s battles are slow-paced and a bad match can drag on forever.

There are many different maps to play in. Some of them have specific historical settings behind them too, like the evacuation of Dunkirk. There are different geographical layouts for most maps, which both make the experience feel authentic and fresh. And the game also has a dynamic weather system to immerse the player into naval combat further.
Finally, if you don’t mind playing a little bit of ranked and are a fan of going solo – there is a ranked mode. It lets you play 1v1 matches too. But it might be too competitive to be bothered with for most people, so sticking to learning team-play is the best way to go.

As I just mentioned, the game makes teamwork very important, and the lack thereof can end up causing a loss. But unlike other games where you just lose a quick match and move onto another one – World of Warships is a slow game, which means you will be stuck in a match for many minutes and have to pray for a chance to turn the tides of battle around.
Unfortunately, uncooperative teammates are not rare in the game, and you will find yourself in these situations every once in a while. However, it does get better after a certain level as you are paired with more skilled players, and that’s where the fun starts.
When the community is cooperative – it’s a beautiful experience. Without even communicating, the battleships help each other complete the objectives, each class makes up for the other’s weaknesses. The game is extremely entertaining when you’re either playing with friends or with a good team.
And if you keep changing the classes you play, you won’t get burnt out by the game for a long time. Thanks to that, each match will feel like a completely new experience. In that case, even losing does not feel frustrating whatsoever, and you’re eagerly looking forward to the next match.

Visually out of time

With regards to the game’s graphics, it’s oddly behind compared to most games that came out in 2015. When it comes to World of Tanks, it’s understandable that they would have to completely recreate the game at this point to give it newer graphics – so the community is fine with what they get.
However, for some reason, World of Warships does not look as good as most other games did at the time of its release, and it still does not today either. The water looks very decent and can pass as realistic, but even at Ultra settings, the ships’ graphics can show their age at times.
And the one aspect that always feels low quality – are the islands. While the battleships only look like they have low graphics under certain angles and lighting, the islands consistently remain visibly outdated. It just doesn’t let you feel like you’re playing a modern game in 2021.
Of course, it does not take anything away from the amazing gameplay, the realism of the controls, or even the great sound design that makes every canon fired feel like it mattered. But for people who prefer to play games that justify their awesome hardware, this game falls behind by a lot.

Not your average beach day

World of Warships is a great game that knows what it’s doing. It provides an authentic experience that replicates the old times’ naval warfare. The game has a few setbacks in terms of its community and aging graphics. These things are ultimately forgivable as the game is the ideal package that you will find for this genre. And like I said, when you’re having fun with this game, you’re really having fun.

There are two sides to everything