War Thunder: do you want to take part in World War II?

War Thunder is an exceptional free-to-play MMO game. Released in 2012, developed and published by Gaijin Entertainment. Winner of Best Simulation Game at the Gamescom 2013 Awards.

War Thunder is a military combat-based game. The game is a multiplayer online battle of Aviation, Ground, and Fleet military vehicles. It features the mid-20th century’s environment. The concept of the video game is based on World War II warfare.

The game is available on PlayStation, Xbox One, Microsoft Windows, Linux, and Macintosh operating systems.

The gameplay of War Thunder is very detailed. It is a real-time strategic combat game in which anyone can win depending upon the skillset and positioning.

The vehicles used in the game are of every type. As explained above, you will fight on land, sea, and air using tanks, battleships, and aircraft. War Thunder can be played with multiple views, including a third-person view, cockpit view, gunner view, and virtual cockpit view.

There are tons of modes to play in War Thunder. The game is available to play in multiplayer as well as in single-player mode. Some game modes are for specific types of combat. For example, Enduring Confrontation is the mode in which you will only see aircraft battles.

In the multiplayer mode, a player can play: 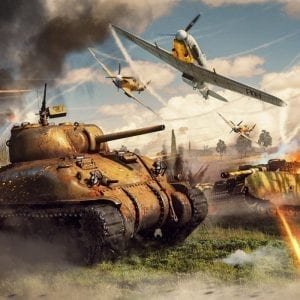 In the single-player mode, a player can play:

Like all other action multiplayer shooter games, you have a health bar and a time counter in which you have to win the match when you enter the arena.

In all these modes, either your team has to destroy all the opponents’ vehicles or capture the enemy base for a larger period compared to the enemy. The game’s main focus is an online multiplayer mode, but it can also be played offline in solo campaign mode.

The vehicular system in War Thunder

More than 1,800 highly detailed aircraft, helicopters, tanks, warships, and other combat vehicles were designed perfectly and according to World War II warfare.

The vehicle system is divided into 3 classes:

The ground vehicles are categorized in:

All these vehicles are ranked according to their abilities.

The tanks are ranked from the first rank I to the seventh rank VII.

Fleet is ranked up to the fifth rank V.

These vehicles are taken from all over the countries that are engaged in World War which includes:

In War Thunder, over 100 different maps are representing the main historical atmosphere.

The maps are designed for different kinds of battles.

The naval and air maps are quite larger in the area as compared to ground maps because a greater area is required for the planes and ships to attack and defend in the battle.

The missions in the game are very diverse. A player can enjoy almost every kind of combat in the game. The vehicle’s types will depend upon each mission type, and specific vehicles available will be listed in each mission within the game.

The mission in War Thunder includes:

After playing and winning the battles, you will collect rewards and medals to achieve higher ranks and unlock more perks in the game to fight against difficult opponents.

On Steam, War Thunder is one of the most played games in 2019, with over 25 thousand concurrent players. The game didn’t lose or seen any decrease in its popularity and active users. Because of the game’s continuous updating, the developers keep on adding interesting features to the game to make it more engaging. It is also a cross-platform game in which players using any gaming system or console can be matched in the same battle. Every player on the same server can enjoy the game equally. Some players are even making money through Revenue Share Partner System by creating custom content on War Thunder.

Is War Thunder Worth it?

One of the main qualities of the game is that it’s free-to-play!

For action and hardcore lovers, this game can be proven much enjoyable and engaging. From graphics to sound effects, almost everything in the game is well-designed, giving you a real sense of old times’ intense wartime. You can have and can unlock everything in this multiplayer battle game by just playing and spending time in the game.

We can say that War Thunder is one of the most intense strategic war games that offers polished graphics with a unique realistic physics engine.

However, some bugs and glitches are present in the game, but the developers are regularly updating the game.

If you like war games, strategic battle games, or any shooter game, don’t wait any longer. Download, install and play this remarkable game.