Tom Clancy’s Rainbow Six Siege: gets better with every upgrade

Tom Clancy’s Rainbow Six: Siege is an online shooter video game developed by Ubisoft Montreal and released by Ubisoft in 2015. The next installment of the tactical FPS series under the sign of R6. If you're a fan of the title take a closer look.

Since being released, Tom Clancy’s Rainbow Six Siege (RSS) consists of two five-player teams that face-off in a cat and mouse-like war game, where each side has to either attack or defend and achieve their objectives. Regardless of the game mode, environmental challenges and destruction are always at the forefront of RSS.

The attackers develop their tactics by spying and investigating the area using drones, and defenders have to prepare for the siege by positioning defensive devices and fortifying walls. Siege is an intense tactical multiplayer experience that went through multiple transformations since its initial release in 2015.

The update does the job

There isn’t a part of Rainbow Six Siege that didn’t undergo diligent tweaking and improvements. The game went through a literal overhaul with the new operators, events, maps, weapons, and items and earned an unquestionable reputation in the multiplayer shooter genre.

By now, it’s also clear that Ubisoft digs changes and that we’re witnessing a continuous evolution, so the Siege we know today probably won’t be the same we’ll know in one year. We can always expect new additions, gadgets, and challenges, such as holograms or different methods to fire a gun.

There have been around 20 colossal updates that helped the character and game development, although the campaign didn’t change drastically. The online mode is the one that experienced the most noticeable transformation. But the last year’s Tachanka rework is probably one of the most anticipated and impactful alternations in Siege.

It was players and fans themselves who influenced many of these changes. It is what helped RSS gain stable and passionate support and fanbase community. As a result, the official Twitter account of Rainbow Six Siege shared that they reached 50 million players in September of 2019.

Fan loyalty and love prove that Ubisoft Montreal created a stellar game regardless of the platform, which helps the PlayStation 5 version grow and provides players with an exceptional experience. Thus, Metacritic rated it as one of the best games of 2020. But the PS5 RSS is still fresh and new, so we decided to test it for you. Here is what you should know about Tom Clancy’s Six: Siege on PS5 and whether it’s as engaging and adrenaline-fueled as other versions.

A marvelous improvement hindered by toxic community and excessive cheating

Ubisoft deployed the long-awaited, free next-gen PlayStation5 upgrade for Rainbow Six Siege on the first December of 2020. One can play the game via backward compatibility, but Siege PS5 is still an improvements-ahead of the PS4 version. 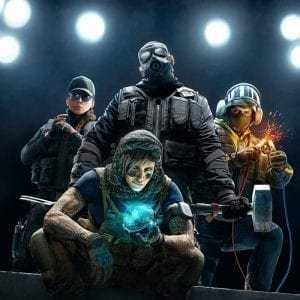 Before the release, the developers announced in the PlayStation’s Blog what to expect from the latest upgrade. Here are some of the Rainbow Six Siege PS5 graphical enhancements you’ll discover on consoles.

Hence, the most noteworthy changes are resolution and framerate, which is best visible in detailed maps and Terrorist Hunt mode. You might get a better experience by choosing the Performance mode instead of Resolution. It aligns more smoothly with the fast-paced reactions in the game.

But whatever game mode you choose, you’ll probably notice that the double frame rate takes the game to the next level due to the improvements of map destruction. It is worth mentioning that you’ll need some time to get used to the maps, learn or remember them.

At some points, it seemed that the game expects us to know everything as we start playing, which can lead to your team dying. Hence, you’ll have to invest some time into becoming familiar with all the rules. That makes the game challenging yet perhaps more exciting than ever.

The enhancements also allow more control over movements and agility. The aiming feels more authentic, and the overall sensitivity of the performance feels more realistic. Responsivity also got better, so it takes less time to load the game and navigate the Menu.

Otherwise, the game updates are just as marvelous as technical improvements. There’s a new Operator, Aruni, that feels like a natural addition to the game. And we have a reworked Skyscraper map that still requires enhancements because some parts of it feel ineffective.

But despite Rainbow Six Siege PS5 being an impressive upgrade, it has its flaws that some might find too detrimental. One of those issues is mouse and keyboard cheating, which players aren’t allowed to use for RSS console, but that still doesn’t mean they won’t. Some people feel comfortable finding ways to bypass these restrictions, and Ubisoft should do something about it ASAP.

Another problem with the RRS PS5 is the game’s toxic community. It is hard to ignore the hate speech and unwillingness of teammates to collaborate. The use of friendly fire and getting voted out of the match are also critical and can seriously deteriorate the overall experience.

Tom Clancy’s Rainbow Six Siege is hardcore, intense, and demands attention and tactical skills. The PS5 version disappoints neither its long-time fans nor new supporters. The technical improvements and impressive updates make it more than the worth of playing, although some might find the cruel community too much.

However, one can’t deny that Siege PS5 is a stellar improvement that offers a smooth experience, and DualSense gives it a unique sensation and responsivity. If you can disregard the cheating and occasionally brutal fanbase, Siege is one of the best multiplayer shooter games continuously evolving.