Teamfight Tactics: the champion of the auto battler genre

Teamfight Tactics (TFT) is an auto battler game developed and published by Riot Game in 2019. Available as a PC, Android, and iOS version, the game is inspired by Dota Auto Chess as a part of the League of Legends franchise. The game centers around eight online players battling against each other, constructing an army, and fighting to be the ultimate player.

Teamfight Tactics consists of different stages, and each of them has several rounds. Each player has 100-health points initially, but each time they lose a battle, their well-being levels deteriorate. The damage depends on the number of enemy champions who are still alive and their strength. After a player’s health slides to zero, they die and lose all their champs.

The game’s rounds include a planning and combat phase. The first stage automatically rewards a player with gold and a refreshed story with new champions. The planning phase also gives a limited time to decide which champion to choose.

Like in other auto chess games, strategical decision-making is the backbone of Teamfight Tactics. A player has to determine on which hexagon they will position their champions. It all occurs in 30 seconds, after which the team locks and the game takes the player to the battlefield arena.

The battle is typically PvP, and a player has to engage in combat against a randomly designated enemy. But it’s not a lonely fight: the player is taking their Little Legend and champion team to the arena. The battle only finishes when there’s a clear winner or the time runs out. The round should result in one team winning, or both players lose health points depending on how many opponent champions were left alive.

Teamfight Tactics won the awards of the second most discussed and the 15th best iOS game of 2020. It also has a satisfactory Metascore rating on Metacritic (79). But what makes TFT worth playing? Or should you rather skip it? We played Teamfight Tactics for you on a smartphone and PC, and these are our impressions.

The carousel of excitement & a potential auto chess champion

To better understand Teamfight Tactics and whether you will like it, you should first be familiar with auto chess. Battle Royales and Hero Shooters used to be all the rage in the previous few years, but auto battlers seem to be the new addiction.

The genre is relatively a newcomer to the gaming scene, and it started with Dota Auto Chess in 2019 when Drodo Studio released a game mode for Dota 2. The players themselves alter particular aspects of a video game, and these tweaks aren’t always drastic. The genre quickly gained popularity, which inspired the creation of other similar games. One of them was Teamfight Tactics, developed as a part of the League of Legends franchise.

Auto Chess games usually involve multiple players who have to choose their units, build the winning team, and battle each other. The crucial element of the genre is strategic thinking because players have to distribute their units on a chess-like grid.

But even if you have played auto-battle games before, don’t think you’ve seen it all. Teamfight Tactics is an exciting take on the genre that makes it more thrilling thanks to changing the concept of battling a clone. In Teamfight Tactics, players will engage in combat head-to-head against their opponent. Each one gets to see and experience the same. That adds drama and difficulty when playing with friends.

Instead of cooperating, players have to face each other’s army and be the ones to survive. That takes Auto Chess to a new level and brings the same sensation to each player, as they can see the combat occurring in real-time. 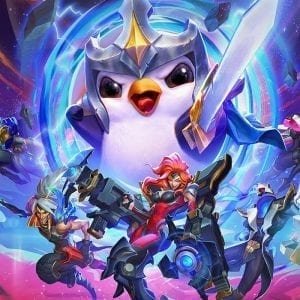 Perhaps the most challenging yet unique part of the game is the Shared Draft that happens in the beginning and after every six rounds. It is known as Carousel, and during this free-for-all competition, players position in the neutral parts of the battlefield to choose one of 10 available units. Once you decide on your item, nobody else can claim it. But you have to think wisely and select the one that will make your team stronger.

The Carousel round can get quite frantic when playing with friends because each player has to quickly decide how and where they will position their Little Legend before the carrousel wall drops. Thus, everyone has to identify which item they want and gauge where it’s going to be. It’s the moment when using the LOL attack move technique might prove to be useful.

Teamfight Tactics intensifies the excitement of the genre with unique rounds that give fun a new meaning when played with friends. The adrenaline-filled decision-making also adds more substance to TFT comparing to other games in the genre, placing it at the top.

By no means is Teamfight Tactics without any flaws. The Android mobile version lacks performance flexibility, and the game sometimes takes its time to respond. It’s a work in progress that requires extra tweaking, especially considering screen adjustments.

The player icons appear to be too small, which is still not a deal-breaker. If you can disregard that the app still needs graphics improvements and the occasional technical issues, you will probably enjoy an exciting auto-battle that will stimulate your brain cells.

PC version tends to provide more excitement and a gameplay experience. The engaging battles, stellar visuals, and a fresh take on the genre add credibility to all the praise TFT got. It might not be on the same level as League of Legends, but it still provides everything it promised to give: it’s fun, easy to play, and there’s no repetitiveness.