Team Fortress 2 is one of the very first games to make the concept of ‘heroes’ popular in first-person shooters and essentially inspired future games that saw great success, such as Overwatch and Rainbow Six Siege, to name a few.

Valve is known for developing multiple successful video game franchises that all stopped at number two, and Team Fortress 2 is one of the most important parts of that practice. Despite being released in the year 2007, the game continues to be one of the most consistently played first-person online shooters of all time – sitting at over a hundred thousand daily users even in 2021.

Besides the never-ending official updates, what keeps the game alive is the unique and varied gameplay, tasteful humor, cross-platform gameplay, and a community that refuses to move on. It’s impossible to thrive in an oversaturated market even after a decade, so it’s without a doubt that there is something special about the game. But is it still worth your time when there are hundreds of first-person shooters at your disposal that came out more recently? Let’s answer that question.

Team Fortress 2 is one of the very first games to make the concept of ‘heroes’ popular in first-person shooters and essentially inspired future games that saw great success, such as Overwatch and Rainbow Six Siege, to name a few. The game has 9 different character classes to choose from and two different teams in each match, which keeps things fresh and provides a lot of substance in terms of how a match can go.

The characters are split into three different types, which are Offense, Defense, and Support – and they have unique abilities even within these sub-categories too. Each of the characters has three different types of weapons to choose from: the primary, secondary, and melee types. All these different weaknesses and strengths to each class and its characters prevent the game from being repetitive, and the formula almost never gets old. It is constantly balanced every time something feels overpowered or out of place.

An Atmosphere Unlike Any Other

Team Fortress 2 feels like home to millions of gamers, and that’s because of its atmosphere and aesthetics. It’s a game that does not take itself seriously, and every character has a unique personality despite the fact they are in a multiplayer-only game. The game makes great use of tasteful humor that successfully managed to appeal to people of all ages, and it’s always cited as one of the best things about the game.

A multiplayer game having personalities for the playable characters is a relatively normal thing now – but at the time, Team Fortress revolutionized the concept. And even a decade later, it’s one of the best examples of this that you can find. 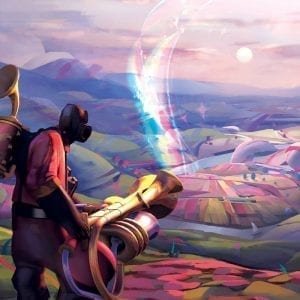 The game’s graphics are not as good as they once were, but the art-style is still fun to experience because it never took itself seriously. While most other games steer towards realism or extremely well-made textures, Team Fortress 2 focuses on a cartoonish approach in which everything looks like a game. It makes the goofiness of the character’s personality stand out even more.

The game’s item shop is huge and uses the aforementioned goofiness – which allows it the freedom to sell almost anything in the shop. You can browse through many different cosmetics types, and most of them are funny hats and masks that make your characters look entirely different. There are many non-cosmetic things to buy, such as unique weapons (don’t worry, they don’t ruin the balance) and new taunt animations to assert your dominance within the playing field.

The best part about the item shop is that the game offers cross-over items with many different games now and then, making sense because it’s popular and owned by the developers of one of the largest video game clients of all time.

Like with the playable characters – the game modes of Team Fortress 2 are very diverse and large in number.

Many additional game modes are less populated but very fun to play, and seasonal events add holiday-appropriate game modes for the community. It would be best if you recognized a lot of these game modes because most modern-day games have one or more of them present, and it’s surprisingly still as fun within Team Fortress 2 as well.

However, the game’s community is almost as important as the game’s core mechanics itself – and it’s both a curse and a blessing when it comes to this game. Since many of the players have played for too long, they have grown an immense attachment to the game and often act as gatekeepers to new players since they believe they’re not good enough.

And the average run-of-the-mill toxicity you’re used to in other games is also just as consistent in this one, of course. It’s not to say that there are not some nice people around too who would even help you learn the ropes – but it is quite frustrating running into the toxic players who try to keep newer players outside.

So, like with most games, it might be a good idea to have a team made up of your friends to avoid a match-up with people who might ruin your experience over trivial reasons.

A solid free-to-play shooter experience with a heart

Time has been exceptionally kind to Team Fortress 2, and it remains the king of the hill. Many different games do what it did better, but they have not recaptured the exact feeling of familiarity and enjoyable campiness that this classic offers its players.

It’s a fun game suitable for people of all ages. It continues to have a consistent player-base against all odds, kept alive with many different updates that enhance the different game modes and maps. Valve may not be too active of a game developer, but when they make a game, it is truly an experience to last you a life-time.

The game is available on Steam