So, how well do you think you know the Steam platform? Whether you are new to Steam or have been gaming for the past eighteen years through the site, it’s time to put your knowledge to the test. We’ve put together twenty-five questions to test your knowledge on Steam – will you beat your friends in this Steam Quiz today?

For anyone who is passionate about video games, you’ve no doubt heard about Steam. The platform was launched eighteen years ago and is now used by over 150 million users around the world. It offers players the chance to buy, sell, and also store their games, as well as get involved in the worldwide Steam community. There are plenty of other great features, such as the ability to trade items, and the platform has only continued to expand its offerings since its introduction in 2003.

For anyone who is unfamiliar with Steam, it is very similar to other content-streaming platforms, such as Netflix. It offers games for all ages, including adult titles and those suitable for kids and teens. Steam was created by Valve and was designed to offer Valve a way to offer automatic updates for their games, as well as offering third-party titles on the platform. However, it’s expanded to much more than that with video streaming, social networking, and a web and mobile storefront. 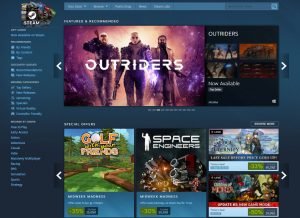 If you haven’t heard of Valve before, they are a US-based video game developer and digital distribution company based in Washington. Valve was founded in 1996 by Gabe Newell and Mike Harrington, who had previously worked together at a large tech company. Harrington left the company earlier on, leaving Gabe Newell as the sole owner. Valve is well known for creating popular games, including Half-Life, Portal, Team Fortress, and Dota. Today’s company has about 360 employees, which makes it the most profitable company based on the number of employees in the US. One thing that sets the company apart is its flat structure, which allows its team members to choose what they want to work on.

Steamworks offers developers the chance to add many of the functions on the platform into their own products. Initially, Steam was just available for Microsoft Windows but has since also released macOS and Linux options. In the 2010s, mobile apps were also added to the collection, available for iOS, Windows, and Android. While the platform is mainly based around gaming, users also enjoy anime, films, soundtracks, and design software on Steam.

Steam is considered to be the largest digital distribution platform for gaming on PC, and by 2017, $4.3 billion of games had been purchased on the site. Game developers find it to be an extremely convenient platform, regardless of the size of their company. Smaller indie creators through to massive companies use Steam, and anyone can partner with the company to add their games to the platform. Developers appreciate the interaction with the gaming community and the ability to engage with them through the store page on Steam. When it comes to updates, this is made simpler with game patches, which players can download to fix or update a title. This allows a simple update cycle and constant adaptation of games.

While Steam is an incredibly popular platform today, it didn’t always have the smooth history and reception we described above. The site crashed when players registered for Half-Life 2, causing great upset from players. This acted as a huge turning point for the company, who realized the attention they would receive for large and anticipated titles.

By 2005, Steam was soon positively received by the gaming community, as they began to allow third-party companies, such as Capcom and Activision, to distribute their games on the site. Players loved how diverse and exciting the platform became, and this has continued into the modern history of Steam.

Which character from Five Nights at Freddy’s: Security Breach are you?

Would you like to know what kind of animatronic from Five Nights at Freddy's: Security Breach do you resemble? Try our quiz with twenty questions to check it out.

Which Arcane character are you?

Let’s put your personality to the test and see which of the Arcane characters you are most similar to today. We’ll ask you twenty questions, which are all based on your personal interests, likes, and dislikes. All we ask is that you answer each question honestly, and then you’ll be matched with your perfect character. Good luck, and have fun playing our Arcane quiz!

What do you know about Arcane?

Are you ready to see how much you know about Arcane so far? We’ve put together twenty questions, all of which have four potential answers. You need to try and select the right one each time so that you can score full marks on our quiz today. Go head to head with your friends and family who you’ve been watching with, and let’s see who’s been paying the most attention to Arcane. Good luck and have fun!

Which League of Legends Champion Are You?

Here is a League of Legends personality quiz! It requires you to answer twenty questions, all of which are based on your personality, gaming style, and likes and dislikes. Just pick the answer that most stands out to you from the choices, as there are no right or wrong answers. We hope you’ll enjoy finding out more about your perfect match and that you will enjoy playing as this champion in the future when exploring the League of Legends.

Try out our 20-question quiz about Sea of Thieves to find out how well you can score and see if you’ve noticed the small details of the game. Good luck!
More..