Roblox is difficult to assign a genre to because it's not a 'game'. It's essentially a platform that provides its players with a large sandbox in which they can create video games of almost every single genre that exists in the industry.

The games vary significantly from each other and can be about anything.
For example, there are games as simple as the player avatars living in different houses in a city and doing casual role-play – while on the other hand, we have well-made dungeon-crawler games complete with swords and monsters, shooting games, and even fishing simulators. The possibilities are endless, and as cliched as it might be to say this, the only limit is your own imagination.
Roblox has been released for over a decade, and its updates have never delivered a visible overhaul. So, has it aged like a fine wine or a waste of your important time? Let’s figure it out.

Roblox is full of thousands of different games that you can join immediately as soon as you launch the platform. The majority of them are free, some of them cost a Robux fee, and some of them allow you to enter the game, but some of the areas are locked behind a fee. If you’re willing to buy some of the in-app currency, you can play the premium stuff – but the free experience is still fun enough.
Whether you wish to play a game or make one, you don’t have much of a limit, and the creativity you end up seeing within the community is incredible. The only catch is to find the right creator for your preferences because kids create a lot of the games that you will see on the platform, and it can take a while to find better content.
The content greatly varies from each other, and you even find copies of existing intellectual properties at times. For example, Dragonball Z games are where you can train to become stronger and spar with other players with your newfound strength. And the creators have the freedom to place their music in the game, so you might end up listening to a complete song playing inside an in-game radio or just high-quality background music in general.
The one setback that applies to the entirety of Roblox, though, is the dated physics. The character movement feels a bit wonky, and even the most well-designed games within the platform still don’t control as well as most modern games would. It can be a bit annoying for platforming and action games, so if you’re someone who does not like the campiness – then you will be burnt out fast.

In 2021, there are many different devices that people use for video games. Some people have dedicated consoles, some use a computer, and some are on many different mobile platforms. The problem here is that everyone has different preferences – and friends often find themselves unable to play with each other.
Roblox is cross-platform, so that means whether you’re playing it on a computer or your smartphone, you can play the same version of the game as everyone else. This allows you to connect with friends and strangers at all times, and even if you mainly play on a computer, it does not hurt to switch to your smartphone at times for convenience.
Additionally, some games on the Roblox platform even offer multiple versions to play, allowing mobile users to have a less-intensive version of the textures for better performance.

Not one to Lego

Terrible pun, but to the point. Roblox has been out for around a decade, but it does not update its dated graphics at all. Sure, the toy blocks vibe is intentional, and the majority of the player community does not seem to mind – but the officially licensed Lego games have shown a significant difference in the visual department and still managed to keep the blocky atmosphere intact.
It would be understandable if there were a second Roblox engine in development, but since the current release is all that we have, it does not go well with the times and can only appeal to people who are okay with playing something that feels like it’s from the PS2-era of video games. Don’t get me wrong, I’m not one to prioritize graphics over gameplay – but it’s still something that contributes to your experience at the end of the day.

Every game has toxic players and people in the community who try to gatekeep the experience from newer players. However, the experiences within Roblox are usually positive, and you will often find yourself finding nice people that guide you through their favorite games. Whether you’re role-playing or going on an adventure onto the sea – you will mostly find cooperative or indifferent players who won’t try to ruin your gaming experience.
There are still many toxic people, though, and if you’re a younger player, making too many friends out of strangers might not be a good idea due to how much people can lie behind their silly avatars. But compared to many other games that I’ve played, Roblox has a surprisingly pleasant community. 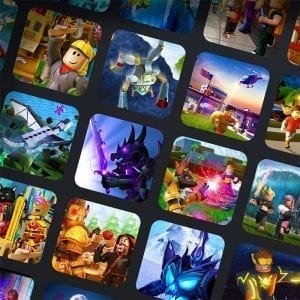 Of course, the creators have a great amount of control over what they make within the game’s engine, and it’s easy to see how much freedom is present when you jump game to game. However, this customization also applies to the player as well, and you can customize your avatar to a great degree.
The cosmetics of your avatar are completely changeable, and this includes your color too. You can have a default avatar that will be automatically imported in every game that you join, and you can have a specific avatar for most games as well. This means that certain games can offer you unique cosmetic options to choose from, and the results can be unbelievably unique. For example, I joined a bubblegum-themed game, and it had people walk around as giant cats, face masks without a body, and avatars walking around with a force-field covering them. It’s an absolute blast to be able to alter your character so much, and it keeps things fresh for a long time.

A never-ending ride that will keep you hooked for hours.

Roblox may be held back in the visual department and suffer from slightly clunky mechanics – but it’s a solid experience if you can look past that and will keep you entertained for hundreds of different hours. Don’t like the people in a specific community? Join a different one. Got bored of a certain genre? Play a game that features another. Bored with playing games? Make one yourself.
The possibilities are endless, and you can meet millions of different people as long as you keep exploring the unique games that Roblox has to offer.