NosTale is a free-to-play MMORPG, developed by South Korean company Entwell and published by Gameforge. If you are a fan of anime get a closer look.

NosTale was released in 2006, it is somewhat surprising that a 15 years old MMORPG shows increasing player numbers in the last few months on steam. You don’t have to play it through steam if you don’t want to. You can download the game directly from Gameforge.

There must be something appealing to players after all this time, right? Well…actually, there’s a bunch of reasons to play this game, especially if you’re a fan of anime MMORPG games. Let’s look closer to Gameforge‘s game.

How does it play?

The art style of NosTale is pretty much what you’d expect from an anime MMORPG with far eastern origins. 2D young-looking character models in a 3D world with a light pastel color palette. If you’re a fan of the style, then great. If you’re not…well, it’s still not bad. It’s probably one reason why the game has aged so well and retains a healthy player base. 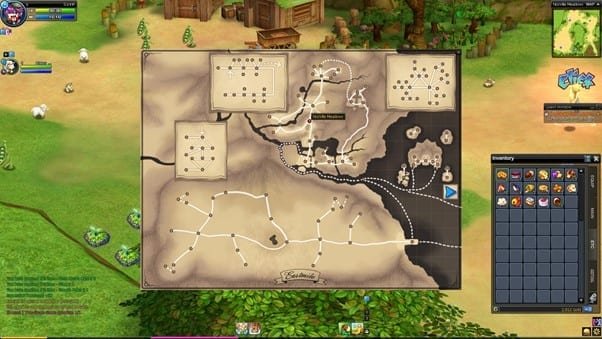 Map of the game world

NosTale’s world is separated into different zones, which players are free to explore at their leisure. Within the zones, you are likely to find some combination of the following.

Enemies are thematically designed to fit in with the aesthetic of the zone. Sheep in meadows, walking tree stumps in forests etc. They provide XP and loot upon defeating them. Some enemies are passive and will not attack you unless you attack them. Others will attack you on sight. The enemy design is good. However, something doesn’t quite sit right with me while I’m beating a “Happy Hamster” to death with a stick.

These act as entrances to instanced dungeons that you must complete within a time limit. Progressing from room to room, killing enemies until you find a way out. You receive a reward of loot, gold, and experience at the end of the dungeon. Party up for better results.

You will likely find various resource nodes in your travels. These can be harvested and used in crafting.

The controls for this game are intuitive enough. Point and click to move your character and pets. Click to target enemies, use abilities that are on your hot bar while in battle. It can get a little tricky trying to click on enemies in the middle of a fight if you have yourself, friends, and pets trying to attack the same thing. What I don’t like is that the game expects you to know the controls and key binds from the very start. For the life of me, I could not find a key binding list in-game. I had to use google and press just about everyone button on my keyboard to try and find out how to select both my character and pet at the same time. Seriously, just add a key bindings list.

The GUI is quite nice. I found it to have all the necessary information that you might want to hand while not being overbearing or taking up too much screen space. One design choice that I can’t entirely agree with is the buff descriptions that appear when you hover over the buff icons under your character portrait. You would expect them to explain what the buff actually does. Instead, you get more cryptic text, which, as a new player, doesn’t help you in understanding what is going on.

But what does that actually mean

The sound design in this game is hilarious, but in a good way, which I guess on par with most anime MMOs. Sound effects for fighting and abilities are all pretty standard. Which is to say they are satisfying enough. It’s the ingame music and “other” sound effects which deserve special mention. During Christmas, the game’s background music was the game’s own version of famous Christmas songs! How awesome is that?

The main story, which guides players through the majority of the game, splits into acts that split into scenarios. It is quite linear, but I don’t mind that. When it comes to MMOs, most main quest lines are quite linear. It’s what’s going on around the main story that adds value to MMORPGs. Fortunately for NosTale, there’s plenty of other things to do.

PvP combat is possible in NosTale for all you who value your ability to beat other players to a pulp. It can be entered into in certain areas and by drinking a “battle potion”. Anyone who has drunk a battle potion can attack or be attacked by other players who also have consumed one. PvPing in one area leads to the spawning of a raid boss who, if defeated, will grant gift boxes to the victors.

PvE combat is very satisfying, thanks to the impactful AoE abilities and attacks as you level up your classes.

Boss raids are most definitely a thing in NosTale. Many different encounters are possible for groups of between 5 and 15 players.

Miniland is a small piece of NosTale to call your own where you can build a house, keep your pets, and play mini-games with friends.

Land of Death is a family (guild/clan) only event that can lead to rare loot for family members after battling high-level mobs.

Trading between players is possible in several ways. You can directly trade with another player, sell items through player-owned shops, or list items for sale on the in-game auction house system NosBazaar.

One of NosTale’s main features is the pet system. You can get pets by lowering the HP of an enemy in the game to below 50% then using the capture skill on it. Not all enemies can be captured as pets, however.
You can own up to 10 pets at a time. When they are not following you around, you can find your pets in your miniland, where you can select which pets to take with you on your adventure.

The Class system in NosTale sets it apart from other MMOs of a similar size and even puts some big AAA titles to shame.
Everyone starts in the same class “adventurer”. After reaching a high enough level, you are able to select from Sword Fighter, Archer, or Magician. Three Archetypes that any self-respecting MMORPG fan should be able to guess what they’re about.
But the customization doesn’t stop there. At later levels, players can get access to specialty cards through completing quest lines. These cards can be swapped in and out to further specialize their character. For example, a sword fighter can progress as follows:

Is it really Free to Play?

NosTale is a free-to-play MMORPG, which would usually ring alarm bells for some players as it did for me. To my surprise, progression wasn’t locked behind paywalls. Spending money CAN give in-game benefits to those who chose to do so, but I didn’t find it unbalanced the game or made me feel “weaker” for not having spent money.

At first glance, NosTale may seem like an outdated children’s game due to the graphics, characters, and general aesthetics. If you dig a little deeper, you will find that this is a fully-fledged Anime MMORPG. It has all the same features you would expect from modern-day releases like PvP and raids. Hell, it even executes some of those features better!

The game is challenging. Most MMOs hold your hand and guide you through training scenarios where you’re never in any real danger. In NosTale, you could very easily find yourself getting mauled to death by a sheep in the first 10 minutes. Brutal.

The learning curve in NosTale can be a little steep at times but once you know what you’re doing there is definitely fun to be had in this game. Whether that be solo or adventures in a party with friends.