MovieStarPlanet is an educational multiplayer game founded in 2009. Mainly the game focuses on creating movie stars, which then participate in the production of short films.

MovieStarPlanet (MSP) is an online social game and app for children, tweens, and teens, where players create movie star characters and play dress-up. The premise sounds innocent, playful, and creative, but the game raises controversies and parental worries.

With its colorful aesthetics, bright colors, and dazzling style, MSP creates an engaging space for kids to create and watch videos and meet their counterparts in the chat room. The official age rating is eight plus, so providing children with an opportunity to connect and grow their network sounds like a great way to boost social skills. Yet, that’s the most debatable element of the game.

No matter if you are a parent or a child, you should know if MovieStarPlanet is safe and worthy of your time, attention, and money. Are the flashy visuals and engaging plot enough to install the game, or should you think twice before doing it?

We played the game and analyzed it to help you decide. Here’s what we found out.

One tagline says that the game is a “safe, creative, and social online playground for children.” There is a forum that improves networking skills. Thus, players can customize their characters and immerse themselves in different celebrity themes. Indeed, it caters to the needs and wishes of the youngest.

Children inherently love dress-ups, sleek animations, and games that let them feel like superstars living glamorous lives. MovieStarPlanet covers all those aspects, and it is imaginative. The game allows children to design artbooks, make animated films, and enjoy online games. 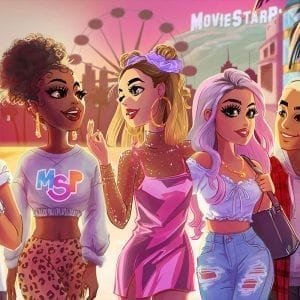 The graphics are aesthetically pleasing, the game is easy to pick up on, and it allows players to select whether they want to visit MovieTown, play games, chat with other children, adopt pets, or go shopping. Hence, MSP visuals are girly, and perhaps girls will find them more attractive.

Those that choose to explore MovieTown will encounter short movies with a simple plot. Watching these films is an opportunity to unlock gifts or earn star coins. Thus, everyone can make a movie that other players will have a chance to see, which is a bonus for those dreaming about being film directors.

Chat has different rooms, such as a skate park, cafe, or a VIP club. It is the best place to make new friends, incite conversations, and reach a new level. Besides, swearwords are censored.

The highlight game of MSP is dress-ups, which is where one can enhance their style, look like a Hollywood star, and compete against others who will create a better outfit. But there are other available games, such as quiz, arcade, and casting, which shows that the creators want to provide kids with an opportunity to enhance their knowledge, creativity, and networking.

MovieStarPlanet fandom goes beyond just playing the game. There are myriad YouTube videos dedicated to MSP, and many are several years old, which is proof of a loyal fan base. Some of these videos show how the game allows children to explore their style and be who they would like to be.

For instance, The Phases of Playing MSP by Melville Msp demonstrates how most players use the game to experiment with fashion styles and uncover which one fits them. Besides, it is a chance to express themselves and feel confident about who they are.

No matter how enchanting, inspiring, and immersive MovieStarPlanet is, it’s also potentially dangerous. Yes, it’s great that kids can make new friends in MSP’s world. But we can’t deny that everyone can create an account and contact a child through this app. Banning swearwords doesn’t stop a predator from sending messages and photos to minors or pretending to be friends.

Various reports say that kids encountered players who sent them illicit texts, causing them trauma. Even though the game has captivating aesthetics, they might be too much for kids and tweens.

Most of the MovieStarPlanet outfits are provocative, which is inappropriate for kids. Children are vulnerable. Their brain is developing, and they are forming their views, values, and aspirations. The revealing clothes players use to customize their characters can send a wrong message and create self-esteem issues.

Another issue with MSP is the lack of customer support. They exist, but when players have problems, they usually get an automated response that doesn’t solve the dispute. Thus, if one wants to be popular on MovieStarPlanet, they will probably have to spend large amounts of money on VIP items. That is another element of the game that incites consumerism and seeing material resources as the ultimate path to being happy.

Some dissatisfied players also report being banned for no reason after they purchased star VIP gifts and codes. What’s even worse, they didn’t get a refund after accessing their account.

In defense of MovieStarPlanet, fans say that the kids should be careful about sharing their passwords, personal information, or other details that could put them in danger. Yet, it might be too much to expect that level of awareness and precaution from an eight-year-old.

MovieStarPlanet isn’t terrible. It isn’t the most brilliant game one can play neither. It is there to entertain kids, boost their creativity, and help them make friends. But it suffers from a lack of mechanisms that will eliminate potential predators, hackers, and players with bad intentions.

If it’s a game for young children and tweens, it should have appropriate outfits and themes. MSP oversteps this, making it more suitable for teens, but the premise might be mundane for them.

We won’t say that kids shouldn’t play this game, but parents should talk with them beforehand and warn them about the risks. As one can’t expect minors to be as careful as grown-ups, parents should supervise their kids and ensure that they are not victims of exploitative people.

The conclusion is that MovieStarPlanet is fun to play, and it seems that the game creators wanted to provide kids with a unique experience that lets them feel fabulous. But things often go out of hand, which is the problem with MSP. The silver lining is there’s always room for improvement, and MovieStarPlanet 2 might surprise us with its tweaks and enhancements.