Minecraft: 3d world that will consume you

Minecraft is a videogame developed in 2011 by Mojang Studios. The players explore a blocky, generated 3D world with infinite terrain and extract raw materials, craft tools, and items. A game that mixed up a lot on the market.

Minecraft is a sandbox-style game that is open world, and imaginative. The goals and objectives are completely up to the player. What you do in the game is your choice. Of course, if you want to follow along with the main story, then there are advantages of doing so. I won’t spoil the end-game, but by following along with the story, you are rewarded for doing so.

The game has 2 versions as of 2021, bedrock and Java. Cross-platform is available for Minecraft within their respective version. For example, a Mac player cannot join a Switch player, because they are 2 separate versions. With that said, if a PS4 and a Switch player try to join each other, it will be successful because they’re both on Bedrock Edition.

Minecraft is pretty much available on every modern console making it inescapable. This is great for players because they don’t have to spend unnecessary money on an extra console just to play Minecraft. It is super convenient.

We will assume that your playing on survival for this article. Once you get past the loading screen, you will spawn in the game. Your spawn location is the most important part of the game since if you die, you will respawn at your spawn point, so for early-game, it is recommended that you stay as close as you can to spawn. If your playing on hardcore, however, then you will not respawn, and the game will immediately be over, and you will never be able to see your world again.

To begin with, there are 3 important things you will need to survive the 1st night. The first is Hunger. Hunger keeps you from starving to death. Next, you need a roof on top of your head, and it can be anything (village), (Cave), (Structure), Basically, anything that is safe and has a roof on top. The third and last thing you will need to survive your first night is tools, and tools are essential to have. You will need tools to harvest wood, stone, and dirt. These blocks can be very useful for building your first house if you decide to do so; also, a sword can be used to defend yourself from monsters in case of an emergency. Those are the most important steps when surviving your first night. Of course, some factors can make these challenges easier or harder depending on the time of day and the spawn location, but you should do the best you can on your first night because the first night is the most important night of Minecraft. 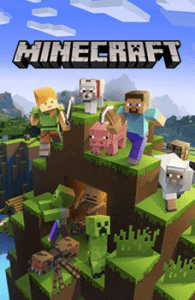 There are some other things you can do within your first couple of days of your Minecraft adventure. One of those things would be farming. Farming requires seeds most of the time (although there are exceptions). To find seeds, look for a pile of grass in the plains; or in the grassy area, and then chop the grass for a chance to obtain seeds. Once you’ve obtained the seeds, you will then need a hoe. To craft one, you will need 2 wood and 2 sticks. Once crafted, you will then need an area of water to improve the quality of the soil. You can plant the seeds near a pool/ocean, or you can use a water bucket  (Iron required) to make the seeds grow faster.

Once you harvest enough crops, you can use them for all sorts of things, food, breeding, and so much more. Speaking of breeding, once you obtain enough crops, you will be able to make animal farms ranging from Cows, Chickens, Sheep, Pig, Etc. You can use these farms to reproduce more and have an unlimited supply of food and resources. However, you should beware that if you kill too many of your cattle, it will become impossible to breed any more of them unless you reach contact with another wild animal.

Mining is one of the most important factors of Minecraft. Mining will allow you to horde resources and blocks. These resources can be used to upgrade armor/make new armor, as well as new weaponry and tools. Two of the most important minerals for the early game would be coal and iron. Coal is super useful because it can create torches, and torches can be used to light up dark rooms, which can keep monsters away and help the player see better. Iron is also super important because it is a solid material for the early game, and having Iron materials will make you stronger.

There are other ores in the game as well. However, they are more advanced and require further digging to access. For now, coal, and iron, are your two most important resources for surviving the early game.

Armor is a super important thing to have in Minecraft. It can protect you from zombies, creeper blasts, Enderman attacks, and so much more. Having armor will allow you to attack monsters without the risk of death, making it a great way to farm monster loot. There are 6 types of armor in the game, but in the early game, 2 of them are only relevant. The first being leather, which can be dropped from cows. And Iron armor, which can be made from iron ingots.

Minecraft is a super fun sandbox game with infinite possibilities and so much to offer. If you have not played it yet, then you should definitely give it a try because it is a blast to play, especially with friends and family.

Minecraft may not be the perfect game, but, in my opinion, it is near perfection. It is endless fun and hours of enjoyment. Minecraft’s sandbox-style gameplay isn’t the first of its kind (at this point it is worth recalling another game of that type which is Garry’s Mod) but it is certainly the most influential sandbox game out there.

Overall, Minecraft is an excellent game for everyone. It appeals to all players and all playstyles. If you want to play casually or hardcore, you can do that. Wanna play with friends? No problem. Maybe, you just want to play to build only? It is only your choice. Literally, anything is possible, and it is so amazing that the game has reached 10+ years of existence. It has come a long way since then and has become the ultimate game for gamers.