Microsoft Flight Simulator 2020 is a truly legendary series of amateur flight simulators. It is even included in the Guinness Book of Records as the oldest game series because the first part was released back in 1982.

The previous version of the simulator was released in 2012 under the name Microsoft Flight. But the game received very modest reviews from critics and was forgotten for almost seven years. Microsoft Flight Simulator 2020 is being developed by French studio Asobo for Microsoft. It is noteworthy that this studio has never created a game in the genre of simulation before. This article will try to figure out, and either developer has succeeded in creating a high-quality simulator and what the developers still have to work on.

By far, Microsoft Flight Simulator 2020 is Xbox Game Studios’ most ambitious and technologically sophisticated project in years. That is just the world’s generation based on satellite images from Bing maps, procedural generation, and artificial intelligence.

And it works! You can visit almost anywhere on the planet. Visit any airport in the world, and even fly over your own home. The natural landscape looks quite good. I am talking about volcanoes, mountains, reservoirs. It’s not for nothing that Azure servers store about two petabytes of data to generate the world.

If we talk about lighting and weather effects, then in this regard, everything in the game is at the highest level. If you set real conditions, then the time of day, weather, and wind speed will correspond to the real-weather in a particular location. The weather updates in real-time, but this will require an internet connection.

The same goes for aerodynamics. With a wind speed of 150 knots, which is more than 77 meters per second, the behavior does not change significantly. In such extreme conditions, it becomes more difficult to control, and at some point, it even starts to seem that the plane is flying in place, but even taking off at such a wind speed is quite realistic.

But in reality, during takeoff and landing of civil aviation, the tailwind speed should not exceed 5 meters per second. And the crosswind speed, on average, should not be higher than 17 meters per second. I repeat, we are not experts in this matter, but this moment looks rather strange, so we decided to voice it. By the way, with such a wind, decent waves appear in reservoirs. A trifle, but nice.

There are 30 aircraft available in the game, although I am talking about the Premium Deluxe edition. In the standard edition, you only have 20 aircraft models at your disposal, which is also pretty good.
All models were created in collaboration with civil aircraft manufacturers. So you will see very accurate and detailed copies in the game. It also applies to the cabins, which have been recreated to the smallest detail. Almost all buttons and elements can be interacted with, but you will have to find their purpose yourself.
Microsoft Flight Simulator 2020 is a platform, so in the future new aircraft will appear in the game, including from third-party developers. And, for sure, many of them will have to be purchased separately.

The game has more than 37 thousand airports in the world, and about 80 have high-quality details. And if the manually recreated 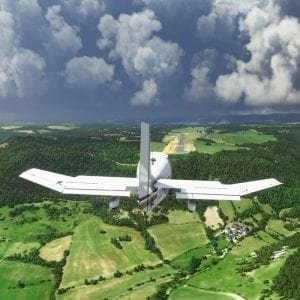 airports look great, the rest of the same cannot be said.
But there are complaints about searching by airports. If you were hoping to find the required airport by its name or the name of a nearby city, then this is impossible in the game. The search is carried out by the international airport code, which you hardly know. And if you search, you can get the code according to the IATA standard, while the search works only with the ICAO standard.

Microsoft Flight Simulator 2020 includes eight tutorial missions that introduce you to the fundamental aspects of aircraft control. Moreover, the first mission is broken, so it was impossible to pass it in the game’s release version. At a certain point in time, the task disappears, the plane goes into autopilot mode, and then you can circle endlessly in the air. With other missions, problems also occur, but usually, they are solved by restarting the mission.

In conclusion, Microsoft Flight Simulator 2020 is technologically impressive indeed. The game deserves the title of a new generation flight simulator. However, the game needs to be improved since many problems and shortcomings somewhat spoil the project’s impression. Perhaps it was worth postponing the release for several months and trying to fix the optimization and management problems.