Maplestory is a 2D Scrolling game on the platforms. The game players complete their quests, battle the monsters to gain the in-game currency known as "Mesos".

Players also experience various points and items. Players have a selection of options when playing with others online. They can make parties where wealth and experience are spread from a monster. Maple Story was created by NEXON and WIZET together. Maplestory has two versions. MAPLESTORY and MAPLESTORY 2. It’s a massive free-to-play online multiplayer videogame.

Here’s a link to the official trailer of the game for yall to understand it more easily,

Not only that, here’s another link for version two of the game,

If yall don’t know to start the game and have never played before, given down below is the beginner’s guide to the game for all of you to understand.
You can find the guide and get to know about the fun adventures, characters, merch, community, etc., about the game on this link: https://maplestory.nexon.net/game/beginners-guide. 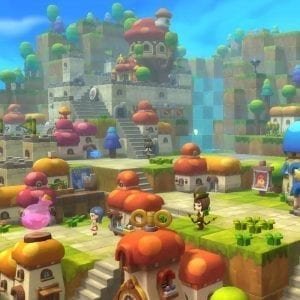 MAPLESTORY exists in worlds or servers. Players can generate numerous characters in an individual world, though the characters in dissimilar worlds can not relate. The videogame’s worlds are divided into several channels allowing the players to switch between the worlds with easy access. The ability to changed or switch between the worlds and characters was added to the videogame in December 2007. Still, the option was later removed from the game in May 2012 because it caused a negative impact on the game’s character’s gameplay. When making a new character, there are six subdivisions of lessons available for now, with two other outlets with one class each. Explorers, Cygnus Knights, Heroes, Resistance, Nova, and Sengoku. Beast Tamer and Child of God have one class in together divisions. Some classes are right now not available in other regions, but we hope it is available soon.

Explorer characters start on the island or map of maple and begin as a Beginner class, whereas Cygnus Knight characters/players begin as Noblesse class and start their voyage on Ereve. The Hero classes are characters with background layers related to the game’s enemy, the Black Mage.

So what do characters do? Here’s a summary about the six heroes,
Aran has the Combo System, a special piece to the class, allowing them to produce multiple shots by hitting monsters, giving them enthusiastic energy, and doing combo-overwhelming skills. Evan is similar to Magicians, but he uses a dragon that fights together with them. Mercedes. The third hero. is an elven archer who uses Dual Bowguns to fight off the monsters. Phantom is a Thief character with the capability to copy skills from Adventurer characters. Luminous is a magician of light who can also do dark magic, engaged from the Black Mage. The shade is the sixth and disremembered hero, whose presence was wipe out during the Black Mage’s sealing. They use spirits to support them in battle.

Overall, it’s a cool game to play as you can never get bored due to the many different and exciting characters. The quests, trading in-game, missions, battles, adventures, and more than you can imagine.

RELEASE DATES OF THE GAME:

Maplestory was first released on 29 April 2003. The second version, known as MAPLESTORY 2, was released on 15 July 2015. Some updates were made, too, for the game to run smoothly. Maplestory was created in South Korea, and then it was confined to ten different regions in 2010.

PROS OF THE GAME (all classes) :

Now every game has its advantages and disadvantages to it, so here are some pros of the videogame listed:

CONS OF THE GAME (all classes):

And these are the cons of the MapleStory videogame, and although it has its flaws, it can still be played very well. Maplestory has a total of thirty-nine million player account worldwide. Whereas Maplestory global has around 8 million users by 2011 alone. As in 2014, it was amongst the top ten MMOs by worldwide proceeds, not too shabby, huh. Right around now, Maplestory has over 180 million users account registered to it.

ABOUT THE CREATOR/PRODUCER OF THE GAME:

The game was originated created in South Korea by Nexon and Wizet. The creator of the game, NEON, is a South Korean Japanese videogame publisher whose main work specializes in online videogames on pc. They manage over 80 titles. Nexon was found in Seoul, SOUTH-KOREA, but it was later located in TOKYO, JAPAN.
Secondly, the Wizet was a game development studio situated in Seoul, South Korea.