Legends of Runeterra: challenging and relaxing at the same time

Legends of Runeterra is a free-to-play collectible card game developed and released by Riot Games in 2020. The game is set in the League of Legends universe, and it allows two players to battle against each other to be the first one to sabotage the opponent’s Nexus.

Since it belongs to the LOL’s realm, Legends of Runeterra (LOR) consists of a handful of familiar and epic characters varying from fluffy to scary. Hence, if you’re enthusiastic about the franchise, you will probably be happy to see heroes, such as Jinx, Garen, Teemo, and even the magical Poros.

It is another release that shows the determined intention of Riot Games to expand and be more competitive. Although cards might not be everyone’s favorite genre and they can be nerve-racking, they managed to create a charming innovation that sets it apart from similar games.

The game starts as a typical 1v1 match where each player receives 20 randomly chosen cards with a health-Nexus of 20 points and zero mana. After that, they have the last chance to trade their cards before the match begins, and they receive a mana gem.

Only the player who has the luck of getting the attack token can do it while the defender has to choose the right move to block them. These will switch after each round ensuring that both sides have equal odds. With every match finishing, players can draw another card from the deck. The maximum of mana gems they can get is ten, and the ones they didn’t use become spell manas.

Players can destroy the opponent using these spells, creature cards, and effects. As in every card game, the goal is to create the best trades by deciding which units to play or cast the spells. But the more times you play, the more comfortable you’ll get, which will make it much easier to plan your moves and set them into motion.

Does that sound engaging, simple, or dull? Do you think there’s probably no difference between Legends of Runeterra, Hearthstone, and Magic: The Gathering? Here’s what we think about the PC version of the game!

A familiar but refreshing take on the genre

Hearthstone popularized card games in 2014, but you might think there’s only so much that devs can do in this genre. Others probably think it’s hard to beat traditional card games. Despite being aesthetically-pleasing and having similar mechanics and flashiness as similar spin-offs, Riot games managed to go one step ahead by introducing depth others don’t have.

For example, Legends of Runeterra has a distinctive feature known as the Oracle’s Eye, which gives you a grasp of the impact of spell resolution or attacks on the board. It is how it shortens the time you’d probably spend delving into math calculations or worrying how spells effects will unfold. Thus, unlike in other games, you don’t have to utilize all the given manas during a round. It is refreshing to see you can use the remnants and turn them into spells without any punishment.

However, the focal point of Legends of Runeterra is the champions, who come from the LOL’s realm but fit all the rules and standards of a card game perfectly. These epic heroes allow you to track the enemy cunningly. For instance, Braum has health-rejuvenation ability while Ashe can give frostbites to the most powerful opponents. But each of the champions gets to level up after they fulfill particular conditions, allowing more power and authority. 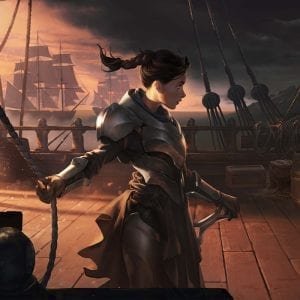 Yet, these heroes are not your ultimate way to winning. If you don’t know how to leverage and maintain them alive, your enemy will probably end the game with an evil grin, knowing that they beat you. Each of you will give your best to defeat and outsmart each other, and that’s the main charm of Legends of Runeterra.

It requires wit, patience, and knowing how to lure the opponent into a trap. When you’re successful in your intentions, you’ll experience a rewarding feeling because you’re aware the other player thought about all the possible strategies to destroy you. But whether you lose or win, you’ll still get experience points that will go to the region of your preference and allow you to level up eventually.

Runeterra manages to make the combat terrifying and engaging all at once because you know that spells can give back the cards to your enemy, which gives an eerie feeling when that opponent is, for example, Zed. It is why you don’t have to be familiar with League of Legends or even like it. But you will, inevitably, notice that these champions bring more zest to every combat. They make the fear of losing much bigger and raise the stakes.

Nevertheless, newbies will probably find it hard to decide which region should be activated or how to use their Wildcards. Each brings different rewards, making it more natural to commit to one and get more relevant cards. Those new to the genre and the game will have to spend some time deciding how to set their experience that further affects their deck.

Yet, Legends of Runeterra makes every issue look menial by adding innovative features, such as Wildcards and free combat passes. It feels so good to know you don’ have to build decks from whatever you can get. Instead, you can select the cards you want to add to your collection, and you have some control over what you earn.

If you’re a card-game enthusiast, the odds are high that you’ll find Runettra’s visuals, mechanics, and champions refreshing and immersive. Thus, you don’t have to pay anything, and there will be moments when you’ll probably wonder how it is possible.

Indeed, it is one of the best free experiences you can get in the genre, although it uses many previous CCG principles. Legends of Runeterra is generous with rewards and controls you get over cards, but it also keeps the combat challenging to master. That makes the game both entertaining and relaxing.