Last Day On Earth: Survival – Will you survive the zombie attack?

Last Day On Earth: Survival is a mobile zombie survival game developed by Kefir Games. The game is available on both iOS and Android operating systems.

Despite the first iteration of Last Day On Earth: Survival appearing on an iOS app store and Google Play store for android devices in 2017, the game is still technically in beta. That’s to say it’s still in active development. That is good news, considering the game is packed with content and features already.

Kefir! The developers have other mobile games in their catalog, including licensing for a Metro 2033 mobile game. So you know they’re legit and aren’t going to do half a job like some other mobile developers could be accused of. If you’re a fan of survival games, base building, resource gathering, PvP etc then it’s probably worth your time to check this game out.

How to Survive the Last Day on Earth

After customizing your character, you start out in the wilderness next to a broken-down old hut, which is your home base. There’s some basic equipment nearby to get you started that you can scavenge. From there, you want to take stock of your base, what materials you have, and what materials can be scavenged from the immediate area.

Once you’re up and running, your goal is to try and survive. You need to make sure you don’t die from….hunger, dehydration, zombies, wolves, other players. All of which are a constant threat.

In order to improve your chances of surviving your last day on earth, you will need to build a better base for protection against attacks. You’ll also need to come up with a way to provide yourself with sustainable food and water sources. Equipping yourself with weapons, clothing, and other items that can be found or built is key to survival. Leveling up your character so they are stronger than other players, zombies and wildlife is important. All that is much easier said than done.

You will need to progress through the technology system in order to obtain blueprints and plans for crafting weapons and base buildings.

Blueprints are locked behind level requirements so you want to focus on gaining exp by killing, gathering, and crafting as much as possible in order to level up and unlock what you need.

From there you need to spend points in the blueprints menu to unlock what you want to craft.  So you won’t always be able to unlock everything.

If you have the required materials you can then craft the base element you want. It will then appear in your inventory and you need to select it and press build. From there you can select where in your base you want to place it.

All those things require resources to build. Beyond the most basic of resources, you will have to travel to different locations to find the loot needed.

On the road again

Traveling to other locations is done by running out of the edge of the zone you’re currently in. You’re then presented with a map of the world localized to where your base is. From there you can select other areas to travel to. Travelling takes real-world time, roughly 10-15 minutes to get to somewhere close by. You can expend “energy” to run there and get there in a matter of seconds, but you only have a finite

supply of this. Unless you pay for more. Your energy also refills over time.

Travelling has its own inherent risks. You don’t know what could be waiting for you when you arrive at your destination. You need to take enough food and water to sustain you on your trip. It’s also a good idea to take some health regen and a weapon in case you get into combat.

Combat is very likely. You’ll probably run into zombies or wildlife but there’s also a chance you’ll run into other players/survivors. Whilst you don’t have to fight each other, we all know how it goes online…

So that’s the basis of the gameplay and what you can expect to be doing to survive. There’s a LOT of other content in Last Day on Earth: Survival, which you may not expect from a mobile offering, such as:

The game is free to play but does have a real-money shop where you can buy items to help your chances of survival or refill your energy. Is it pay to win? Yes. But you have to remember microtransactions are 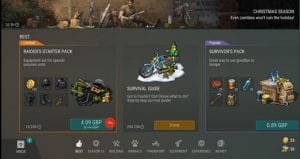 standard practice now in mobile games. The game is still playable and enjoyable without having to resort to buying from the real money shop.

It’s balanced in such a way that it is very challenging, even at the beginning of the game, to survive and progress. This can be made easier by spending some cash. You could purchase a survival pack with food and water, for example, or some firearms and armor. 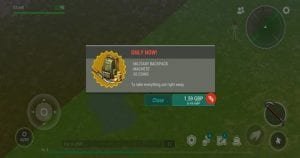 You’ll also be made aware of flash sales whilst you’re in-game to try and tempt you to part with your cash for a quick boost.

If you’re a gamer who doesn’t mind a challenge and steep learning curve, then this zombie survival game is entirely playable and enjoyable without spending a penny.

All things considered, this is a good game. If you’re a mobile gamer, then you will like Last Day on Earth: Survival. If you’re not, honestly, it’s worth having a look at anyway. It’s fun, complex, well balanced, and puts the players first. A good way to spend your last day on earth.