Hitman 2: Stealth, fiber wire and a flamingo suit. Being an Assassin has never been so cool.

Hitman 2 is a 3rd person stealth action game developed by IO interactive and published by Warner Bros. Interactive Entertainment. Read our review to see if Agent 47 scores a flawless kill.

Hitman 2, released in 2018, is the 7th major hitman title to be released under the Hitman brand. The 2nd since the pseudo refresh of the brand began with the first game in the “World of Assassination” trilogy, 2016’s “Hitman”.

If you’re a fan of the franchise, stealth games, playing an assassin’s role, or approaching objectives in different ways, then Hitman 2 will be right up your street. Considering the franchise is 7 games deep with an 8th just being released, it’s surely worth looking for any self-respecting gamer.

The World of Assassination trilogy is 3 game story arc following Agent 47’s tracking of the “shadow client” as he, in turn, tracks members of the secretive Illuminati-like organization known as Providence.

Hitman 2 looks good. But there’s not much to write home about after that, to be honest. This has never been a game series that, when released, people stop and say “Dude have you seen the graphics on the new Hitman game?”. They’re not bad at all. Just nothing special.

The design is excellent. The Mumbai slums are dusty with an orange hue and give a feeling of heat as much as that’s possible in a computer game.

Characters look and move realistically. You can get some rather nice rag dolling going on if you’re particularly energetic in your execution of someone, which adds a nice sense of satisfaction to some kills.

The UI is very clean and minimalistic, which goes along nicely with the game’s aesthetic as Agent 47’s demeanor. He is a no-nonsense, efficient contract killer. The UI reflects that. 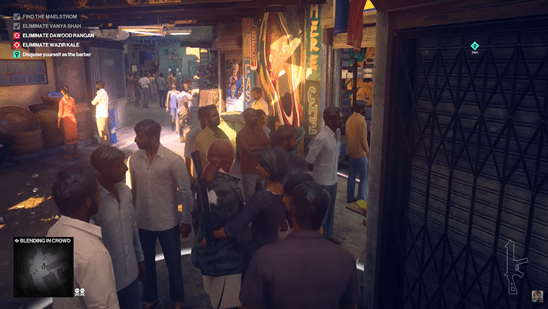 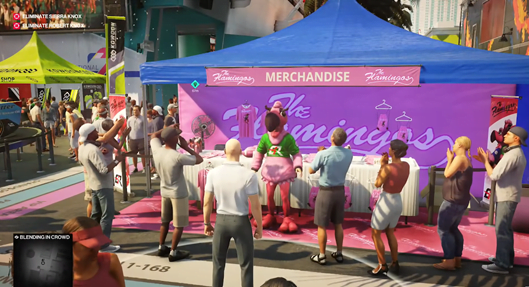 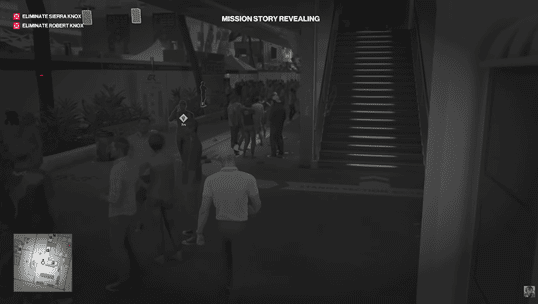 Each location is a semi-open environment that the player can explore and navigate at their own pace. Provided you can figure out how to access locked areas and avoid detection, of course.

Each location has its own aesthetic styling. So guards uniforms and the general dress of people in the area will be different. The accents of the NPCs match what you would expect from people in that area of the world etc.

Within each location, you can expect to find a plethora of NPCs, some of which are relevant to your mission, some of which are not. You can interact with them in many different ways. Sometimes it will be necessary to kill them, especially if they’ve just witnessed you committing a nefarious act. Sometimes you will have to talk to them. You can also take their uniforms/clothes in order to fit in if you incapacitate them.

You will be able to find weapons in the world, either from an NPC you have bested or just lying around, decorative axes on walls, for example. Weapons may not be immediately obvious either. Anything can be a weapon if you’re creative enough.

Missions may require you to find a certain item in order to access a new area or complete a kill in a certain way. Things like keys will need to be found.

You can also pick up bits of intel that will further pack out the story.

Like his spiritual successor James Bond, Agent 47 has an almost unlimited way to dispatch with his foes.

The missions themselves can be approached in many different ways. The players can decide what sort of gameplay they’d prefer.

You could go the silent route, sneaking around in the shadows, avoiding the line of sight of NPCs, and delivering a swift silenced pistol shot to the dome.

You could try to blend in, steal a uniform from a henchman or, hilariously, a giant flamingo suit to disguise your identity, walk right up to your target and garotte them with your fiber wire. Take a decorative axe off the wall, slam it into their skull, and stab them in the eye with a pen. You could go out all guns blazing and start dropping people left, right, and centre if you’re feeling Rambo particularly like. There may be penalties and repercussions if you choose one path over another, though.

That is the number 1 unique selling point for Hitman 2. There are countless ways to complete a mission, which results in a very highly replayable game. Some missions will require the most intricate setup and execution that when you finally eliminate your target, the feeling of achievement is actually amazing.

One gameplay aspect I want to address is “instinct” which is basically an ability you can use to see important gameplay elements that you may otherwise walk right past. You can also see enemies through walls. I have read opinions about this being immersion-breaking and making the game too easy. Firstly the game is anything but easy. I see this “instinct” as a pretty decent way to address the fact that you are playing a trained contract killer, the best in the world, in fact. Surely his experience allows him to have an educated knowledge on the likely position of enemies and such like. I honestly don’t mind it, and without it, the game would likely be close to impossible.

You can alter the difficulty of the game, which will make the AI more intelligent and investigative.

After only 2 years since its predecessor was released, can Hitman 2 really be worth it? Honestly, it doesn’t feel like a full-blown sequel. But I don’t think anyone who buys the game will mind that too much as it’s still enjoyable.

The gameplay is complex, replayable, and well thought out. The only big downside is that the story feels a little thin. If you make a game this good, you have to make sure the underlying story holds up to scrutiny. I won’t go into why to avoid spoilers.

Ultimately it’s a welcome addition to the Hitman family and seems to set up Hitman 3 very well.