Half-Life: Alyx is a series of shooters games from the Half-life series created for VR goggles users.

Half-Life: Alyx is another game from Valve Corporation. Unfortunately, Valve games haven’t been on a streak in recent years. Intense competition from the Epic Games Store results in a loss of Steam users, and the latest Dota 2 card game Artifact has failed.

And at such a time, a very daring project for VR comes out – Half-Life: Alyx. It is a new game in this series for more than ten years. Given the not-so-best position of Valve, some were skeptical about this idea. They say the company wants to earn at least some money from the cult series.

It is partly true, especially considering how demand for index devices has grown since the release. However, not everything is so simple because no matter what platform the game is made for, if it is terrible in itself, it will not save it in any way. The games have the best VR game to date and an excellent spin-off for the Half-Life franchise.

The events of Half-Life Alyx unfold between parts of the first and second part of the franchise. The famous “City 17” was under the occupation of Combines Alien invaders. Alien captured the Earth and established a total dictatorship on it. The invaders enslave people to extract the resources of the planet.
The game creates a very depressing atmosphere. Every person is under total control, gramophones installed around. The route of movement is always under control and strictly limited.
The main character of the game is Alix Vance, an acquaintance of Gordon Freeman. With their father Eli and engineer Russell, the trinity becomes the foundation of resistance as they ponder how to overthrow the Alliance.
The storyline campaign takes place in City 17. There is a bunker with the master prisoner – Gordon. The goal of the game is to rescue Gordon and infiltrate this bunker. Of course, the protagonist of the game will have to overcome many obstacles to the bunker.

Beauty in the little things:

From the first seconds of the gameplay, you can see how hard Valve tried hard to develop Half-Life: Alyx. Valve representatives said that the purpose of creating a game is not to make money on the name of the franchise. But to create an exciting project that will allow you to immerse yourself in this universe again. And these words were confirmed by deeds.
Valve has done everything so that players can immerse themselves in the game world as much as possible and feel it literally at their fingertips. The game has a large number of elements that, although not of practical importance. It allows you to feel the world of the game and enjoy it. You can easily take any subject and study it. And the way in the game you can draw anything with a felt-tip pen has long been a meme.

The combat mechanics are on a different level in the game. It applies to all interactions with weapons in the game. You cannot get this feeling in any other game.
Touching again on the aspect of attention to detail, I would like to talk about recharging. Here you have to take out an empty store, load a new one, pull up the shutter, and only then start killing enemies.
The arsenal at Alyx is pretty modest: pistol, shotgun, and machine gun. But each weapon behaves very individually. You need to get used to it and adapt to it. You cannot take weapons from corpses, but you can search them for new cartridges.
As a rule, you can always get hold of new cartridges for a shotgun or several clips of a pistol during the search. 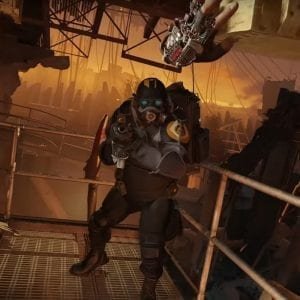 The Source 2 game engine works wonders. All levels are beautifully detailed, and the graphics in the game are perhaps the best of all VR projects. Thanks to the game’s visual component, you can easily read the newspaper or the inscription on one of the food packages.
Valve has created a great atmosphere of City 17 from the games in the series. Panel-type houses, small rooms of tenants, bypassing supervisory services – just a real dystopia. All locations in the game are worked out as much as possible. They want to be, wander and study every centimeter.
The game also has elements of horror, albeit not in large quantities. Wandering around a dark location and meeting not even the most dangerous zombie, you always involuntarily flinch. And if you do not have cartridges and you only need to run away, then the game at such moments is quite a thrill of nerves.

What can you say in the end?

Half-Life Alyx is a very significant project not only for Valve but for the gaming industry in general. Perhaps, it will be Alyx that will become the starting point for creating large AAA projects for VR devices. The project itself has learned to be simply magnificent, and in its detail and elaboration, can easily compete with ordinary games. And for fans of the franchise, a game like Half-Life: Alyx will be the best gift from Valve.