Ghost of Tsushima is a 3rd person action-adventure epic by Sucker Punch Productions exclusive to PS4. Want to know how this rates against Playstations other exclusives? Read our review to find out.

The Playstation 4 has heralded a 2nd golden age for Sony, with many incredible exclusive titles coming to the console. The latest of which is Ghost of Tsushima by Sucker Punch Productions. This stealthy 3rd person action game hopes to stand amongst the elite of the generation with titles like The Last of Us, Part 2, and God of War.

The developers have pedigree when it comes to producing large-scale AAA titles. They are the creators of the Infamous series of games, which started on the Playstation 3. However, there last offering Infamous First Light all the way back in 2014. There are definitely question marks over what players can expect from a game set in a completely different time zone trying to achieve a very different aesthetic and style of gameplay.

The player takes control of Jin Sakai. Jin is a samurai in ancient Japan in the year 1274. Without providing any spoilers, events transpire, and Jin finds himself on a quest for revenge due to the aftermath of a huge battle between Japanese samurai and Mongol invaders.

The art style and execution of that art style is a visual spectacle. It did fall a little short of the reveal trailer back in 2018, but it is definitely still something to behold. With the addition of a dedicated photo mode, you can come out with some spectacular screenshots.

It is also worth mentioning the inclusion of the “Kurosawa” mode. Which basically puts a black and white grainy filter over the gameplay. The mode is there as a nod to Akira Kurosawa, whose movies heavily influenced the graphical styling of Ghost of Tsushima.

At first, I thought this was a needless gimmick, but after having tried it, it does add a certain nostalgic charm. I wouldn’t recommend playing the entire game with it on. But it’s a welcome option.

The Island of Tsushima

The game is set in Tsushima in the immediate aftermath of a Mongol invasion. It provides an expansive, beautiful setting for this open-world game.

You can traverse the landscape on foot or horseback. Whilst on your travels you’ll come across many points of interest. Resources to gather that can be used in crafting. Random world occurrences that you can choose to get involved in if you wish, such as people being attacked by wildlife. Main story quests, side quests, and other types of open-world action. 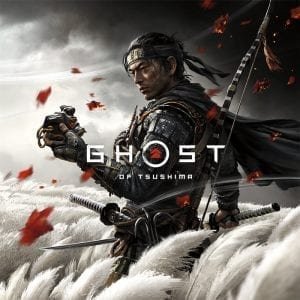 Invariably it’s going to be worth your time to explore whatever presents itself in the world as side stories usually result in some new armor, weapons, or unlocking of a new skill.

Ghost of Tsushima has all the usual in-game features you would expect from other open-world games. What is impressive is how developer Sucker Punch has thematically woven those features into the game world.

For example, you can look at the map and select a location you want to travel to. In other games, this would usually result in either a satnav-like line drawn on your mini-map or an arrow of some sort pointing you in the right direction. In Ghost of Tsushima, you have a gentle breeze blowing in the direction you need to travel, which is made slightly easier to follow by the fact your cape will billow in that direction when the wind blows.

If you are close to the point of interest, there won’t be a big yellow marker or glowing area on the ground. Instead, you may find that a bird swoops down from the sky and leads you to whatever is hidden nearby. Look out for plumes of smoke or anything else that looks out of the ordinary. It will likely be a point of interest worth investigating.

The Ghost of Tsushima’s combat system is based on the familiar with a light attack, heavy attack, block, and dodge mechanics. Players should be able to pick it up quite quickly. However, there are different stances that you can switch to that give you benefits against different types of enemies. This is a nice touch that adds another level of complexity and is again thematically pleasing, considering you’re playing as a samurai. As you progress through the game, you will unlock new moves and abilities that again make you more effective against certain types of enemies.

Stealth is a major talking point in this game. With a name like Ghost of Tsushima, you would expect there to be SOME level of stealth in here somewhere. And there is. The problem is that it feels…last gen. Like it’s the stealth gameplay level, I’d expect to be playing in an age of video games from PlayStation 3 or even 2! You can hide in long grass and scurry across rooftops to escape enemies’ attention. Honestly, I’d expect the enemies to do a bit more other than give up or fire projectiles at you from a distance. Even some of the older assassin’s creed games did stealth better than this.

The atmospheric music in Ghost of Tsushima is awesome. It always seems to reflect and support what is happening on screen accurately. From stealthily avoiding Mongol guards to huge fight scenes, everything seems to fit. Without being an expert (or knowing literally anything about music from that time period), it would also seem to be “genuine” with lots of flutes and drums.

Sony interactive entertainment one again has another winner on their hands in the form of Sucker Punch’s beautiful game set in feudal Japan. Taking inspiration from samurai cinema has resulted in a unique aesthetic we haven’t seen executed to this level before in a samurai game.

The story is a bit of a revenge cliche, but that isn’t necessarily a negative when delivered by such excellent characters backed by a brilliant voice cast. The big bad Khotun Khan deserves special mention.

Tsushima offers players the chance to play out their sword-fighting ninja fantasies in a beautiful setting supported by solid combat systems. Does it deserve its place alongside God of War and The Last of Us 2? Absolutely.