Genshin Impact is an open-world game developed in 2020 by miHoYo. It's a free-to-play RPG that takes us to the fantasy world.

Before stepping into the introduction, let me tell you that Genshin Impact is named the “Game of the Year” by Google Play and Apple. It is still one of the most popular titles on the streaming site Twitch.  You would get blow away by the fact that this free-to-play mobile game is earning $6 million every single day. This game earned approx $393 million within just two months of its launch.

In Genshin Impact, you step into a beautiful fantasy world of Teyvat as a traveler from another world, trying to find your siblings guided by a kind spirit. The game provides you with four interchangeable characters, and you can switch them between the combats and gameplay.

In short, Genshin Impact is a blockbuster RPG game that takes you on a journey to explore the beautiful world while doing challenges and missions to collect rewards. It’s up to you whether you want to follow the storyline or explore and enjoy the fantastic, imaginative world.

Genshin Impact is playable on mobile, Microsoft Windows, and Playstation 4.

As told above, Genshine impact is a role-playing game where you are searching for your siblings in this beautiful world while exploring it more and more. The game has an excellent action-based battle using magic and character switching.

You will get four-star characters in Genshin Impact, and some of them are: 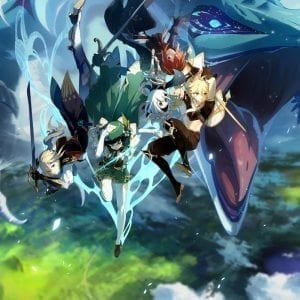 This game has two modes:

The overall level is introduced as the Adventure Rank system, and you can unlock multiplayer mode after Adventure Level 16. Your friends can join you on your quest and do most of any activity together in multiplayer mode.

Genshin Impact is a free-to-play adventure role-playing game. The game is huge, a big open beautiful world to explore, and the combats are providing you a crazy amount of content as a free game. You can get rewards by solving puzzles, loot in crates, and perks during normal gameplay.

However, the game has a Gacha system to get these rare characters with high-power and fighting styles. The in-game currency of Genshin Impact is Primogems. Primogems are used to buy these Wishes. There are two types of wishes:

Is Genshin Impact Worth it?

One of the best features of this game is that it’s free-to-play.

If you are an adventure and action lover gamer, then you will love this game. From the graphics of this extraordinary creative world to the challenging battles and exploration, you will enjoy everything.

Genshin Impact is one of the brilliant PC games of the 2020s. You can enjoy this fantastic game with your friends, which makes it more engaging and exciting.

This game is worth giving a shot!