Garry's Mod is an extraordinary FPS game developed in 2006 by Valve Corporation. Due to the fact that Garry's mode is a sandbox game, there is a lack of strictly defined goals for players and practically unlimited influence on both the generated environment and the game rules.

Garry’s Mod is a physics-based sandbox game that has been an essential part of video game history and an influential tool that has since been perfected in more recent work. It offers gamers a platform to create their own servers and game modes using the tools and open sandbox provided, and since its release, we have seen thousands of unique creations from the community.

Not only that, but before more accessible options became available for content creators – Garry’s Mod was the staple for almost all Machinima on the internet, and every person has seen a few dozen of them even if they aren’t gamers themselves because the topics were not limited to the industry.

It has been nearly 15 years since its standalone release, and it still retains a consistent fanbase that refuses to let it go. So, is it worth your time even in 2021, or has it lost its relevance to time? Let’s find out.

A Sandbox with No End

Garry’s Mod does not have a pre-defined objective or gameplay in place. You start in an empty field with a sandbox to place your desired objects in and then mess around with them for as long as you want. There are hundreds of different playable and non-playable characters and objects that you can choose from in the game, and there is complete freedom to download more things from the community and marketplace. 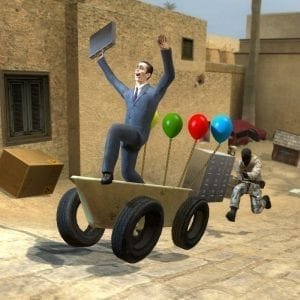 You can choose to play it by yourself or make a public game that others can join – or if you’re not in the mood to create, you can just join a game by someone else. As soon as you begin trying the different games and servers hosted by other people, you will notice how heavily customizable Garry’s Mod is. Every single texture within the game can be altered visually. The gameplay can have new mechanics that weren’t a part of the game originally. Even custom music can be added as the game does not feature any of it by default.

The game supports a couple of game modes already put in place by the developers. Still, there is no limitation in place, and the community has replicated many different types of games inside Garry’s Mod over time. The creativity seen within the different games can be remarkable to see, and entertainment for hundreds of hours is easily guaranteed. It’s not a single game. It’s like hundreds of different games within one platform.

While Garry’s Mod has a lot to offer on its own, it is only natural that players like to take things into their own hands. Whether you want to enhance the graphics, add new character models, change how the maps look, add new game modes, or even add new AI patterns – it’s all doable.

There are thousands of different mods already available to download. What sets Garry’s Mod apart in this context is that whenever someone joins a modded game, they are automatically synced up to the game files they need. Every party can see and interact with the mods.

This is a great convenience because many games require both parties to install mods to see them, instead of one server incorporating them for everyone at once.

You may run into an empty texture or two occasionally despite the game’s auto-download system, and the way to avoid that is to just have one or two Source engine games installed beforehand. That’s because many of the servers use assets from other Source games, and GMod needs you to have the other games installed so that the textures remain complete.

When you have something like Garry’s Mod or Roblox, which are essentially engines that have nothing by default and need players to create their visions inside the sandboxes – it’s very important to have a creative and cooperative community for the experience to be worth it.

Toxic players are unavoidable in any game, and there are a few to be found in Garry’s Mod as well. Thankfully, the majority of the active community is one of the nicest that I’ve encountered in online gaming, and they are always willing to contribute. They’re always willing to guide new players and constantly upload new things in the marketplace for everyone to mess around with.

The bigger servers even have dedicated moderators who make sure to ban hackers and discourage toxicity, so players who don’t want to deal with such people can exclusively play in those as well.

While arguably, the number of mods being created for the game has decreased over time, you’re still very likely to find things related to the latest industry trends in the marketplace at any given time.

More Than a Game

Garry’s Mod is primarily used as a video game, but before Source Filmmaker became the next staple for making random videos on the internet, GMod was the go-to tool for machinima purposes. A majority of 3D videos consisting of memes, recreations of live-action skits, and full-fledged short films based on various fan-fictions were created in none other than Garry’s Mod.

It was the easiest tool to throw your character models into and then had them follow a script at the time, and it did its job pretty well. It expanded to people who don’t necessarily play video games, and it was also used for creating wallpapers by posing their favorite characters in a certain way.

A Champion of Time

When Garry’s Mod originally came out, it was a state-of-the-art tool that offered players the latest graphics, advanced physics, and freedom without the need for extensive programming knowledge – all things that felt revolutionary. It would be justified if the game fell short today due to the passage of time, but surprisingly that is not the case here.

GMod still does everything that it did before very efficiently and is a great way to put your creativity to use without taking things seriously. The graphics can be enhanced through mods, the gameplay is still pretty decent, and the community is active enough for you to never run out of different games to play. It’s hundreds of different games in one and is something you should always keep installed on your computer for a little bit of weightless fun – especially if you have a low-end machine.