Favored by teenage and young adult gamers, Fortnite was published in 2017 by Epic Games studios and shows no diminishing interest from players. I haven't been this excited to play since EDM artist Marshmello's virtual concert in 2019!

February 25th’s announcement from Epic Games begins with “In space, no one can hear you scream.” which for film-nerds is an obvious reference to the advertising tagline used in 1979 to advertise the first Alien film. Yes, Ridley Scott’s Aliens series fans take note: your favorite characters, Ripley and the Xenomorph (the protagonist and antagonist of the series, respectively), have finally been added to Fortnite’s expanding list of playable character skins! Ripley and the Xenomorph can be purchased separately for 1500 V-Bucks or bought together as a bundle for 2220 V-Bucks.

The emote for Ripley (referred to by the Epic Games team as being a “Burst Case Scenario”) is a hilarious reference to one of the more gory scenes in Aliens in which a newly hatched alien graphically exits the body of its victim. However, they’ve made the alien into a much more family-friendly version.

Fans of Fortnite no doubt know that this is only one of the hundreds of pop-culture references and tie-ins that the world-renowned multi-award winning game has made over the last couple of years, including some massively well known and popular IPs such as the Marvel Universe, Star Wars, DC, Terminator, Borderlands, Tron, Stranger Things, Walking Dead, Halo, Ghostbusters, John Wick, and even the NFL.

But it’s not limited to just character skins; crossover collaborations between Fortnite and other properties can be highly particular and surprisingly in-depth. This last week of February, it was also announced that Fortnite would once again be joining with DC in a Batman collaboration, this time in the form of a comic book tie-in. Catwoman and Harley Quinn will also be making an appearance that should satisfy even the fussiest fanboys. DC Comic’s press release teases its readers:

“As [Batman] fights to recall his past and escape an endless loop of chaos and struggle, he’ll come face-to-face with the likes of Renegade Raider, Fishstick, Bandolier, and more. While the world’s greatest detective strives to make sense of this strange new world, he’ll uncover the shocking truth about the Island, what lies beyond the Loop, and how everything is connected to the mysterious Zero Point.” 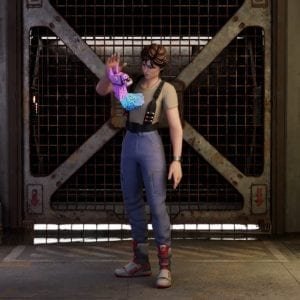 Although it can’t be said that the public has well-received every crossover with Fortnite. No doubt, the notorious tie-in between the 2019 film Star Wars: The Rise of Skywalker and Fortnite left many Star Wars fans very bitter and incensed. For those unfamiliar with the event, a critical plot point for the final film in the main Star Wars saga was revealed exclusively in Fortnite, meaning that fans of Star Wars that don’t play Fortnite (tens of millions of people) were totally left out of fairly critical information necessary to make sense of some unexplained gaps in the plot. Some would say it was an unusual choice on the part of Disney and the film’s director, J. J. Abrams, considering a fairly large portion of the fanbase for Star Wars, is non-gamer boomers who don’t even know what Fortnite is.

Regardless, Fortnite gamers are sure to be satisfied by the continued pop-culture crossovers over the following weeks and months.