The developers try to bring enough changes to each new part. The game does not turn into a copy of the previous one. This year, the promises were also grandiose. But whether they fulfilled, you will find out in this review.

Although management is also part of the gameplay, you will still spend most of your time on the racing tracks. And here, F1 2020 also has little to surprise the veterans of the series. There were no particular improvements in terms of physics. Unless the cars began to go a little faster (which is quite logical, given the technical progress) and their stability at high speed increased. But tires still lack realistic grip and sometimes don’t behave as they should according to their materials. For example, rubber slides like plastic. For those who piss off, it is the best choice. But there is no F1 atmosphere that has to be sacrificed for the most realistic car behavior on the track.
On the other hand, the interface is beautiful. It provides a maximum of information, moreover, reliable and useful. You can monitor the car’s technical condition, temperature, the pressure of tires, and communicate with the engineer. Communication with a team member during the race is also important. He will report on the weather conditions and the forecast for the next few minutes. He gives information about the opponents, lists all the damage to the car, and advises tactics for the remaining circles. In general, an engineer is an irreplaceable assistant. By the way, it is also found in the team management menu, accompanying any player’s action with useful informational phrases.

Significant control errors have been fixed. Now the gamepad is as comfortable to play as it is on the steering wheel. When passing a sharp turn, the game does not punish you by not allowing you to follow the trajectory but adapts to your input device. But you don’t have to rest, and you should be focused because inadvertently, you can fly under braking straight out of the track. The fireballs have become heavier because of which they keep better on the trajectory.
The developers also fixed the problems arising in rainy weather from the list part. In F1 2019, it was impossible to oppose something to the rivals, as artificial intelligence entirely passed the track in all weather conditions. But in the new part, your opponents keep making mistakes that you can take advantage of. And in case of completely hopeless rain, a safety car leaves the track. Everything is like in real races. 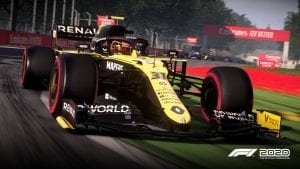 Graphically, the F1 2020 isn’t much superior to the 2019 version. Textures have become slightly Clear, and Natural landscapes have been improved. The weather is pleasing to the eye. As a whole, the general picture remained the same, and especially the drawbacks of graphics are noticeable during interviews and other cut-scenes-activities.
Fortunately, the graphics are not the main thing in F1 games. It should be good enough so as not to cause rejection and catch the eye on the monitor. It is what F1 2020 does. And the atmosphere is the real strong point of the new part. Again, thanks in large part to the My Team mode. Yes, in your usual career and championships, at every start, you feel a surge of strength and are ready to tear and throw on the track, defeating the leading racers of the planet.

Summing up, you should indeed say: F1 2020 can give you pleasant emotions and capture for long hours. The innovations can make Formula 1 fans admire and become an entry point for unfamiliar people. If you are familiar with the series and like to wind circles on the famous tracks behind the wheel of a high-speed car, then the game will not disappoint you. If you are thinking about buying and have never launched any of the games under the F1 brand. Then it would help if you considered or postpone the purchase until the first discounts. Despite all the problems, the game will surprise you with its new modes and give several hours of fun cooperative races.