Euro Truck Simulator 2 (ETS2) is a driving simulation video game developed and published by SCS Software in 2012. Even though it seems like a game that targets a niche audience, ETS2 received enough praise to consider it a cult video game.

There is a sense of a serene adventure mixed with diligent labor as the Euro Truck Simulator 2 tasks you with delivering goods to 60 different European cities.

Stretching from Bremen, Brno, or Ancona to Aberdeen, players get to witness marvelous sceneries while picking up cargo and driving it across long distances. With a somewhat simple premise, the success of the game surprised even the developers.

In 2013, the development team expressed their amazement in a PC gamer article about how the game gained its cult following. At that time, developers didn’t even believe that ETS2 ”will be popular enough to cover the cost of development.” What increased their shock is that even those who are not driving sims-enthusiasts asked for more. As a result, even nine years later, the game is still fresh and up-to-date.

Due to a bewildering success, ETS2 got an expansion pack each year, ensuring to cover every corner of Europe. The basic premise stayed the same regardless of expansions. However, ETS2 never lacks new trailers, famous landmarks, and industries.

To this day, players still have to select their headquarters location in any of the cities the map offers. The game doesn’t allow them to take on big jobs, so you will have to start small and complete quick tasks when a company hires you for a delivery. Employers will cover your expenses such as fuel and road tolls, which indeed makes it feel as if you’re experiencing a regular day in the life of a truck driver.

So, if ETS2 revolves around picking and delivering cargo, what makes it that addictive? Even though we are far from truck drivers, we immersed ourselves in this driving-simulation game to uncover why so many people love it. Here is what we found out.

Euro Truck Simulator 2 pulls you in with its relaxed vibes

It is easy to miss ETS2 among all the shooters, sports, and survival horror video games. The game is not in-your-face, flashy, nor full of twists. But perhaps that’s its principal charm. Simplicity and variety subtly intertwine, creating a simulation brimming with joy and a rewarding learning curve. Players don’t only get to sightsee from the conformity of modern and well-equipped articulated trucks. They also learn how to manage and save money, accept the right jobs, and mile by mile, build an empire.

As you progress through the game, you will earn higher amounts of cash, take loans, reward yourself with a new truck and garage, and you will go beyond waiting for others to hire you. Instead, you will be able to expand your garages so you can employ more people.

With every delivery, you will increase your skillset, improve your position, and grow your business. That will take you to the ultimate goal of the game: to expand and control your company’s operations and enjoy the process of customizing your own trucks.

Like we said a few paragraphs above, the game wants you to start from scratch. It doesn’t matter if you’re a programmer, software developer, or a dancer without a driving license. The game will teach you how to play and be a truck driver. So, don’t fear that you will fail because you don’t know much about delivery, driving, or cargo.

ETS2 is not impossible to master as it provides you with instructions and an intuitive control setup. It is surprisingly detail-oriented. Developers even made sure that players understand the essentials of transporting goods and that beginners don’t struggle with navigating the game. 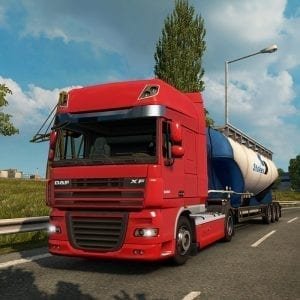 It is all about learning in Euro Truck Simulator 2. The completion of tasks results in experience points you can use to acquire new abilities, such as how to decrease fuel consumption. But, you will also get to opportunity to transport high-value cargo and hazardous materials.  Like in real life (well, in ideal circumstances at least), your work will pay off and award you with a better status.

We found that it can even be challenging to stop driving. One more delivery could provide you with better engine or truck parts. That makes the game that hypnotizing. Hence, you will probably prefer to save some money and buy the best you can get. That also intensifies the feeling of reward.

There’s also a fascinating number of cosmetic enhancements and tweaks that show how deep developers went when creating this immersive game. You can even play your MP3 files or turn on the internet radio. The inclusion of global brands, such as MAN and Scania, gives the game an extra dose of realism and incentive to get lost in the ETS2 reality.

Thus, with lush countryside sceneries and modern city views, you might find it hard to go back to the real world. If you’re a wanderlust or miss traveling, this game could be a vibrant escape from the post-pandemic era. It will pull you in and keep you coming back.

A genuine and rewarding experience

From the seats to chrome rims and surrounding nature, everything feels genuine in Euro Truck Simulation 2. If you want to experience the simulation genre at its best, this game won’t disappoint. The gameplay is detailed, realistic, and easy to understand. Developers didn’t want players to struggle and try hard. They wanted them to enjoy.

Indeed, playing ETS2 is an experience that will put you in a peaceful state of mind and relax you as you follow the road and do your job. And the best thing? The goal isn’t to beat a supervillain or battle with a blood-thirsty monster. Instead, the objective is to learn, improve, and enjoy the ride.