Eternal Return: Black Survival is an anime-themed video game that combines MOBA and battle royale elements, developed and released by Nimble Neuron in 2020.

Eternal Return: Black Survival occurs on Lumia Island with 18 unique playable heroes battling against each other and crafting the best strategy to be the last one standing.

A player can choose one of the characters according to their preferences because each has a different skillset, strengths, and vulnerabilities. After selecting their hero, they will find themselves on a modern and metropolitan island. There, they’ll have to steal goods and collect resources to build weapons and equipment that will keep them alive for long enough to be the ultimate survivor.

Before you disregard Eternal Return: Black Survival (ERBS) as another battle royale that probably has nothing new to offer, we must say that this is by no means the same as other games in the genre. First of all, it migrates much more toward being MOBA with some BR facets. Second, it has an amount of strategic depth that goes beyond similar multiplayer games.

If this got you interested, keep on reading. We played ERBS on Steam to save your time. Here is our experience with Black Survival.

A dynamic game that eventually grows on you

You can play Eternal Return: Black Survival solo, in a duo, or with a squad team of three people. The strategy element works best in teamwork because it will also challenge your communication abilities. Regardless of how you choose to play, you will have to maneuver a map to find your way through this urban island, gather necessary supplies, and manipulate the movement of your opponents.

It is why the game has a staggering level of complexity that demands fast and well-thought-out decision-making. Thus, it’s also beneficial if you’re familiar with the MOBA genre. Otherwise, you will probably die many times before you uncover what strategy works best for you.

As you learn and progress, the game will reward you with experience points. That will allow you to improve your skills and engage in different activities, including setting up traps and eliminating mobs. Eternal Return: Black Survival will surprise you with how much you’ll have to employ your brain cells and leverage your knowledge and planning skills to craft the best equipment by recycling and using what you already have.

One of the most rewarding experiences is that you will have to learn to work with what you got and use the required material because it means being one step ahead of the enemies. Of course, each of Lumia’s zones comes with different kinds of resources and items. Some of them are shurikens, canned cod liver, and revolvers.

Keep in mind that the character you choose determines the weapons you’ll be able to access. Each of them provides you with different traps, ammunition, and advantages. After you learn the basics and feel ready to move further, ERBS advanced gameplay elements. For example, there’s a teleport map that you can use to surprise your enemies. Or, you can make food to speed-up healing and even create private matches. 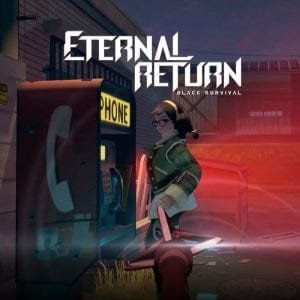 No battle in Eternal Return lasts more than 15 minutes, which makes the game more engaging. It is dynamic, fast-paced, and action-oriented. You will have to be on the move at all times and find ways to make your opponents encounter and fall into your trap. After the combat reaches its 17th minute, areas become restricted, which doesn’t leave much space for those that survived.

If that left you thinking you can find a place to wait out and get out once everything is clear, don’t count on that tactic. From the moment the game starts, you will encounter yourself in a PvP clash. The goal is to be the most active player because that will allow your progress and improve your abilities and features.

Another thing that will make a big difference in your experience is your gear. The game equips you with six weapon-slots, so ensure that you use it to the maximum. Find anything you find useful to keep you alive and defeat your enemies.

You will discover most of the resources and ammunition in secluded buildings and abandoned boxes. However, some you’ll find by killing animals. If you’re patient enough, there are also supply drops from time to time. That will save you from crafting armor for some period. That adds to the unique learning curve of the game. You’ll start small, including weapons, but by advancing through the game and learning how to make things, you’ll have better weapons.

Concerning game mode, we recommend duo or squad because it makes the battle faster. If you choose to play solo, you will be a lone wolf, having to collect, strategize, and fight alone. Regardless of which model you choose, it will probably take you some time to get used to the game’s realm.

You will have to learn a lot, including trap recipes and which items to target to stay alive. That will often be challenging due to saturation levels and taking the wrong path without return. If you’re new to the genre or struggled to like League of Legends, this game will take its time to grow on you, or you’ll quit before it happens.

Engaging, but not the best choice for newbies

Eternal Return: Black Survival won’t be easy on you. It takes strategy, scheming, and planning seriously. It requires learning the basics of survival, and it will teach you how to make your own resources, find food, and build weapons. Hence, you will only move on to the next level if you can do all of that: craft your own endurance.

It is what makes Eternal Return: Black Survival worth your time, but it’s also what could push you away. Eternal Return is complex, competitive, and demanding. The game struggles to keep casual players and those who aren’t familiar with the genre. But if you enjoy having to think, flex your brain cells, and savor the reward, you will probably love this game.