Empire: Four Kingdoms is a free-to-play game set in the Middle Ages, developed and published by Goodgame Studios in 2011. The main task of the player is to build a castle and defeat the enemies who want to attack. Are You ready to face it?

Horror games will get you scared, and action will incite an adrenaline rush. But strategy games will get you thinking.  They will thrill you, challenge your brain cells, and mentally stimulate you. Empire: Four Kingdoms (EFK) does all of that and more!

The game is an MMORPG that lets you witness the rise of four kingdoms where clans will clash, cunning kings will build empires and fight for glory and to become the one lord who will rule from the iron throne. The game plot centers around the earth empire where imperialist emperors rule the townsmen and the player has to stop the war of dragons by attacking these Machiavellian rulers.

EFK is a multiplayer war game that will demand you to think and act fast to defend your castle from treacherous enemies. To do so, you will have to choose your allies, trade resources, and build a powerful army.

If you still wonder if Empire: Four Kingdoms is worth your time, we played it and analyzed it for you. Here’s what we found out.

The good: one of the most comprehensive and detailed mobile games

Empire: Four Kingdoms is an all-encompassing experience that demands hard work to build your castle, and be responsible for keeping strong defenses and army. The game will immerse you into the ancient past, and you will start as a lord of the castle.

To strengthen your castle, you will have to upgrade it, which means collecting resources and constructing by adding objects, such as woodcutter, stone quarry, and farmhouse. It reflects outstanding attention to detail and the goal to make the game as realistic as possible.

As the plants start producing resources continuously, you will get small rewards for your effort and unlock new experience levels. You will have to reinforce your defenses and enhance protection to build an impregnable kingdom. With time, you will enlarge your castle and make barracks to train the soldiers. Every step requires careful planning and strategy. 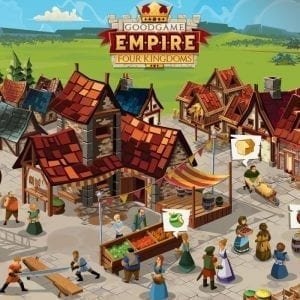 Once you improve the castle, you will start recruiting and training your military. But the army won’t be your only responsibility. After creating adequate living conditions, your kingdom will get its first citizens and allow you to collect taxes from them. Sometimes your dwellers will donate coins out of their kindness, or you’ll discover treasure chests near your castle.

If you love weapons, you’ll be glad to hear that the game creators also thought about that because you’ll get to build them after you have enough resources. That, as well as naming your character and your castle, will help you strengthen your reputation. At that point, you won’t be a novice anymore but a knight. And you’ll also get to test your bravery by saving a kidnapped maiden and winning her hand.

Finishing all the tasks, trading, defending your castle, or leading the siege and winning will reward you with coins and rubies. That is the backbone of your castle’s economic power.

Hence, Empire: Four Kingdoms leverages medieval role-play accurately, and it gives a player an immersive experience where they get to be a construction manager, tax collector, and combatant trainer. Plus, EFK boosts your networking skills because you can form alliances with other players and work in a team environment.

Due to all the challenges and shifts, you will encounter while building and managing a prosperous kingdom, you will probably find it addictive, and you’ll want to see how much more you can achieve. It is unique, and it’s different from other games in the genre because you can move all the buildings in the castle, have many outposts, and interact with others.

The bad: you have to pay for significant improvements

No game is without any faults, and Empire: Four Kingdoms is, unfortunately, not an exception. Even though the game always had special offers, it is becoming too much, especially in the post-COVID-19 era where people are losing jobs, income, and accommodation.

If you want to be a top-level player, your wallet will feel that desire intensely. Instead of being a simple and fun game that lets everyone play equally, it demands you to spend significant amounts of money to compete.

Sadly, sometimes the game will expect you to cash out around 100 USD to re-mortgage your home or get a bank loan. There are no equal chances because not every player is willing or able to spend money. Yet, they will have to compete against those who can. As a result, you might need weeks to progress or reach a certain level, and if you are inactive, you could lose it all.

Besides, it’s not newbie-friendly because players who’ve been there for years and are on much higher levels can attack your castle when you are still building it. Continous updates and pop-ups are also not helpful, and they can annoy you to the point of considering to uninstall the game.

Indeed, Empire: Four Kingdoms requires a lot of nerves and not just concerning strategy. You’ll have to be patient and put up with occasional glitches, but if you like other features, it could be enough to keep you in the game.

Conclusion: expensive but one of the most elaborate games in the genre

If you love ancient sceneries, Game of Thrones, Forge of Empires, and maneuvering exciting worlds filled with thrills, you will be addicted to Empire: Four Kingdoms. It is no secret the game is encouraging you to spend a lot of money nowadays to progress, but that still doesn’t negate that EFK is one of the most elaborate strategy games.

Despite its many faults, Empire: Four Kingdoms has a depth that not many games in the genre can rival, and its attention to detail will immerse you in this medieval world. The graphics, gameplay, and mechanics are marvelous, and you get a genuine experience of setting an empire from scratch.

In the beginning, you don’t have to invest to enjoy the game and feel its thrills. But be ready to test your patience, organizational skills, and strategic thinking.