Dragon Quest XI: expect warmth and familiarity, but not excitement

Dragon Quest XI S: Echoes of an elusive age is a Japanese role-playing video game from the Dragon Quest franchise, developed and released by Square Enix in 2017. Like in the previous entries, the story follows the player as they explore worlds and areas and fight different monsters.

The Dragon Quest franchise always provided players with mesmerizing battles that tempt them to give just one more try. It is a unique game, although some would call it simple. We wouldn’t call the world of the Dragon Quest simplistic. It is rather genuine, authentic, and innocent. But behind what some might perceive as plain is a complex realm left to the player to wander and defend.

The visuals in every entry of the franchise are pure, artsy, and soft. That corresponds perfectly to what you will experience playing any entry of the series. Dragon Quest XI stays loyal to its precedents and celebrates its uncluttered beauty. The XI entry isn’t ground-breaking or completely novel. Yet, that familiarity has the power to keep you playing for hours because if you played previous games, Dragon Quest 11 will make you feel at home.

Dragon Quest XI is, perhaps, an RPG in its purest form consisting of a large and sparkling realm. The game unfolds in a diverse world called Erdrea, a landscape brimming with dazzling areas that are also looting locales. The player becomes an unnamed character who was an infant when his kingdom of Dundrasil was attacked, and elderly Chalky found him floating in the river and saved him.

Chalky’s daughter, Amber, adopts the unnamed character and raises him in the village of Cobblestone. Thanks to that, he had a good and peaceful life. At least, until the coming of age event, when he found that he’s the legendary hero known as Luminary. It was the world tree Yggdrasil choosing him, and it’s now his responsibility to save Erdrea from sinister forces.

Luminary sets on an adventure to save the world, but not long after, a vile king captures him, believing that Luminary will do the opposite: destroy Erdrea. That is the actual starting point of his journey, and when the player starts discovering this beautiful continent with a dreamy hero.

The 11th installment had mostly favorable critics, although some did find the game to be a tad too traditional and conservative due to playing it too safe, a lack of plot evolution, and a soundtrack that felt off.

We played Dragon Quest XI on PS4 to see who is right. Here are our impressions.

Dragon Quest XI doesn’t blow away, but it feels like a friendly hug

Echoes of an Elusive Age wants you to explore and take your time doing it. The scale of this installment is massive, and there is, indeed, so much to see. It is recommendable to take a peek at every corner and check whether you missed something.

There are hidden spots where you can find treasure caskets and secrets waiting between the bookshelves. The game also allows you to enter people’s homes, seek and collect items. Moreover, you’re free to ride your horse, which makes everything unfold quicker. But keep an eye on the map at all times because it will remind you of your goals and help you find your way around.

Wherever you go, you’ll uncover mesmerizing sceneries and towns that were inspired by real-life cities and cultures, such as Arabian Peninsula, Reykjavík, and Venice. However, these are only short stops on your destination, so you don’t get to dive into all the details and locales.

It is saddening that, although you can go back to these towns and revisit, you’re not genuinely free to wander and explore. Instead, you’ll find yourself only passing through to get to the next point without enjoying what you thought will be possible. 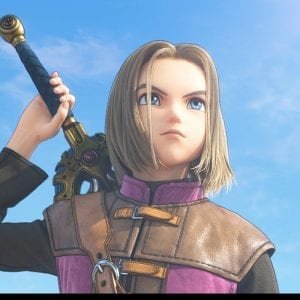 As you go further, you will meet many helpful NPCs on your journey. But none of them has any particular depth, and their only purpose is to help you navigate Erdrea and your mission. You will also have to engage in turn-based combat with different enemies in the overworld, but controlling the menus won’t result in anything particular. It doesn’t matter where you stand because all you get to do is to move Luminary around.

A skill-tree measures your ability to progress. It is based on a variety of available weapons, and each of them has its unique skill-tree. Hence, you should pay attention to upgrading the ammunition you use in most of your battles.

After hours of playing Dragons Quest XI without any exciting thrills, you might find load screens annoying, and you’ll want to get over with it. It is not to say that Echoes of an Elusive Age is dull or irritating. But there is a lot of unused potential in the game, although it still provides players with a pleasurable experience. There is warmth in these mesmerizing views, and there’s comfort in not experiencing enough thrills to be under an adrenaline rush all the time.

Nothing new, but does it have to be?

Depending on your answer to the question above, you’ll like Dragon Quest XI, or you’ll find it anti-climactic. Echoes of an Elusive Age isn’t ground-breaking, and it’s more safe than exciting. Both sides of critics are right to some extent, so whether you’ll love it depends on what you expect from this entry.

Indeed, the game has impressive scope. It offers a colossal world and mesmerizing visuals. But it does leave you with a sense of wanting to see and experience more. Some won’t find that detrimental to the game. Others might not even notice it. Regardless of not using all the potential, Dragon Quest XI is comforting, warm, and it feels like coming back home.