Crusader Kings III is The Sims of the Middle Ages, a Game of Thrones simulator, a practical 7th-grade storybook, a field of endless experimentation, and an amazing fun story generator.

Crusader Kings III is believed to be the easiest entry point to the Paradox Development Studio grand strategy universe. I’m afraid I have to disagree; it’s easier to start with Stellaris because many of its elements are borrowed from turn-based space 4X strategies and are familiar to most players. However, the CK3 developers did their best to make life easier for neophytes.
There is a good tutorial here, an extremely convenient system of hierarchical tooltips, a built-in encyclopedia, etc. Crusader Kings III is still far from the easiest game to understand because everything is not built on diplomatic relations between states. As in the same Europa Universalis IV and most of the turn-based 4X strategies I know, but on personal connections between rulers and vassals. The main thing here is family.

Crusader Kings III is an excellent tool for studying history, understanding the princely strife’s reasons and how feudalism worked. Some elements of which, by the way, calmly survived to modern times. The game, like many other Paradox strategies, is worth using in school.
And with the help of the Crusader Kings III, you can conduct interesting historical experiments. For example, create your religion with ritual cannibalism and eat the Pope, as one of the players did. Or try to unite Russia on the eve of the Mongol invasion. And meet the invaders with a common front with the involvement of European allies. Or, playing for the Polabian Slavs, try to resist the German expansion to the east and make the Hansa a great Slavic trading republic. Or unite scattered African tribes around Ghana and invade Europe, like in the Noughts + Crosses series. Revive the Byzantine Empire within the Roman borders. Make sure the Viking Age does not end. Make the Ethiopian Empire the strongest country in the world.
Everything is possible in this game, and all means are vital for the welfare of the family. And even the murder of family members. Even suicide, there is such an option here. Bribe, negotiate, plot, participate in wars, imprison your relatives, and sell captured enemies, convert everyone to your faith or become an atheist, kill prisoners, and seduce relatives. It is a real game of thrones. Crusader Kings III will surprise you more than once when it turns out that the game has options that you never knew existed. For example, visit a brothel, get a cat, or find a secret village.
Each new game is full of discoveries here, and in Crusader Kings III, you can get stuck for a very long time. But remember, the game will end as soon as your family is interrupted or 1443 arrives. After all, in 1444, Europa Universalis begins.

The graphics, in comparison with the previous version, have become much better. Although, the game uses the same good old Clausewitz 2 Engine, on which all Paradox Development Studio games over the past ten years are built. 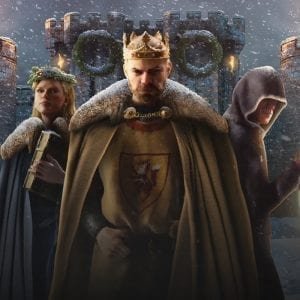 Crusader Kings III shows that the series is progressing but in small steps. The game is better in the amount of content to Crusader Kings II with all DLCs. However, it offers new ones to replace some of the lost mechanics. The main advantage of the sequel is that it has become much friendlier to newcomers. If you’ve always wanted to play Crusader Kings, this is the best time to start. The content is slightly less, but it will cost less than add-ons for Crusader Kings II. In itself, the third part is a great game.