Spring may be around the corner, but Winter isn't over yet! All you Kings and Queens out there bundle up and put your feet by the fire for the newest update to Crusader Kings III.

Crusader Kings III – Paradox begins this Dev Diary with the cliche Game of Thrones-inspired tagline “Winter is Coming.” And while that slogan has been somewhat overused over the last few years to the point that everyone has gotten sick of hearing it (I’m still exceedingly bitter about the final season, which was objectively garbage), this new update to CK3 is bound to reel us back in for more. 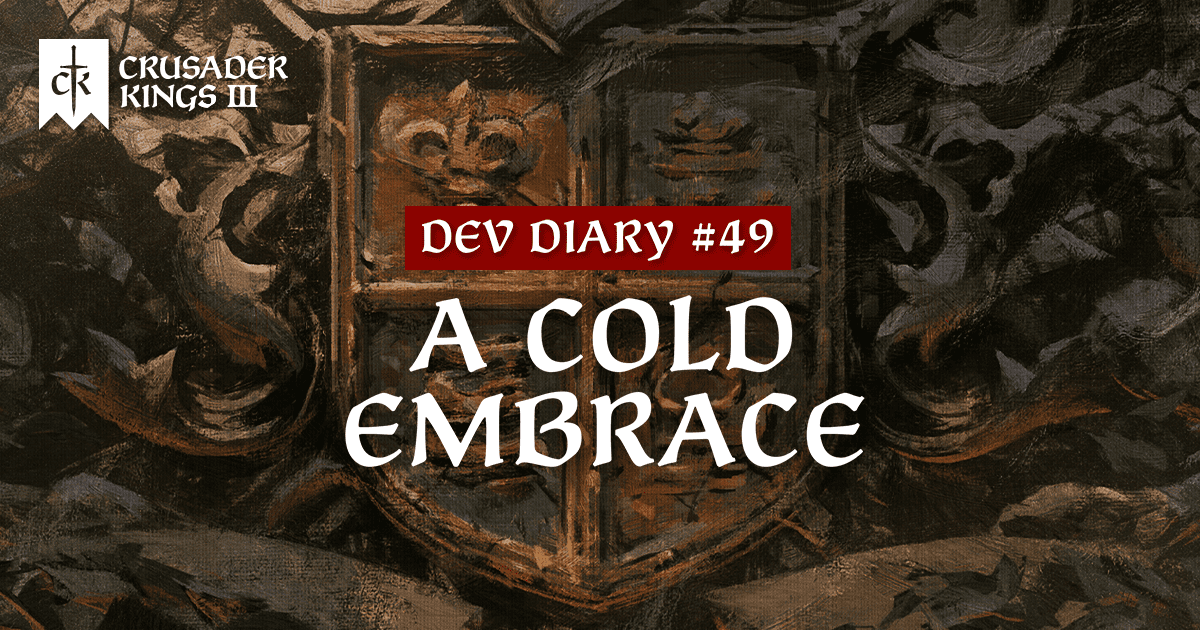 Winter has now been added to Crusader Kings III. As the months go on into the year, the map will, according to Paradox, “gradually get covered in snow, clearly showing the extent of the freezing cold.” We can barely contain our excitement. It was almost unbearable to see the north-most and high-altitude regions of the world still verdant in January, so we welcome this obvious fix to that annoying oddness. Paradox continues,

“The system itself is fairly flexible and allows for a great degree of control, as we can set which provinces should experience Winter, and which shouldn’t. Winter won’t be limited to just the northernmost parts of the map, so expect snow to appear in places such as the Persian Mountains, or on the heights of the Tibetan plateau.”

But you’ll be pleased to know these cool changes are not merely cosmetic! Winter in CK3 comes in three levels of intensity; mild, normal, and harsh. Apparently mild and normal will be typical of central and southern Europe, while harsh winters await gamers in regions like Finland, Mongolia, Siberia, and Tibet. Depending on how severe the Winter is, your armies will lose supply over time. Meaning that players will now need to pay much closer attention to the max supply limit of baronies to make sure their army doesn’t wither away in freezing starvation like Napoleon’s notorious and ill-fated campaign against Russia. It doesn’t stop there. Heavy cavalry will be at a serious disadvantage in combat in Winter, while some men-at-arms like the Tibetan unique unit will have an advantage.

Have you ever noticed how much quieter it sounds when there’s snow outside? It’s not just because people are staying inside or driving less, and it’s actually because snow absorbs sound waves. And in a nod to that phenomenon and for the sake of immersion, Paradox’s sound engineers have modified the ambient sound effects you’ll hear during in-game Winter. It’s rather clever how they did it, as the developers explain in the Dev Diary,

“The way we achieve this is to link the shader that covers the region with snow and Ice to a real-time float parameter, that then talks to our Audio Middleware Engine Fmod… It attenuates sound layers, controls effects such as equalizers and reverb, and reshapes the original sound that was there during summertime, and morphs it into wintertime.”

Unrelated to any winter theme, they’ve made some other updates. For example, it’s been a long time evident that Ireland was severely deficient in counties and baronies compared to its neighbors, Scotland and England. Thankfully, the developers have recognized that and added a few more baronies and a couple of counties to western Ireland. This should make playing on the Emerald Isle more rewarding. As for Italy, while not having any significant shortage of counties, it had too few baronies, and so a few have been added in the region just south of the Alps and in the lands south of Rome.