The latest Dev Diary for CK3 has announced an upcoming patch titled “Azure” and teased the first major expansion.

In the most recent Dev Diary, the CK3 team revealed that there would be an upcoming patch called “Azure” that will be released at some point in the early summer and will be followed pretty closely by a major expansion. Unfortunately, at this point, there are virtually no confirmed details about what the first major expansion to CK3 will be based around. However, we think we can make a decent guess. As the last patch, “Corvus” was related to the DLC “Northern Lords”, the next patch, “Azure” may be suggestive of what the expansion expected this July or August would be about.

Mirroring the “Northern Lords” release in Winter, the next DLC will be released in the Summer. Because of that, we’re expecting that there may be the introduction of new features that are exclusive to the ingame summertime. “Northern Lords” introduced snow during winter, so maybe the yet unnamed expansion will include summer weather issues like drought and wildfires? Maybe there will be more interesting content related to summer fairs? Perhaps they will include more options or content for outdoor-related activities like horseback riding, hunting, fishing, or mountain climbing? 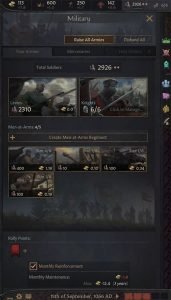 Fans of the Crusader Kings game series will note that the majority of the expansions for CK2 often involved making more regions of the map accessible or allowing specific cultures or religions to be playable. (For example, The Sword of Islam DLC for CK2 allowed Muslim characters to be playable) Of course, Crusader Kings 3 already allows the player to choose any culture and religion and select rulers across the Old World as far east as India, Tibet, and western China. Perhaps the expansion will allow for more government types, such as the Merchant Republic? Or even a Theocratic government? At this point, it’s only speculation.

Depending on whether there are any leaks or not (there probably won’t be), we likely will not know more about the next expansion until PDXCon Remixed on May 21st – 23rd. But don’t be disappointed. Instead, you should sign up as this event is both free to attend and digital (meaning you can join in from home, with no travel required)! It’s also been suggested that during PDXCon this May, we may find out about the next game Paradox will be released, and based on the online speculation, it appears likely that it will be Victoria 3.

We do have some details about the free “Azure” patch. The developers indicated that this patch would improve the game’s stability, fix bugs, make Quality-of-Life changes, balance gameplay elements, and add some basic community-requested features. For example, the patch will improve the war declaration window UI to provide better, more accurate, and helpful information about your potential war opponent’s strength and clarify the objectives for each possible Casus Belli. Besides, the patch will give starting rulers a small contingent of Men-at-Arms, which will depend upon that ruler’s income and culture, and when a character is landed for the first time, a batch of default Men-at-Arms will be generated for them.

The developers also indicated that they are actively working on improving the multiplayer stability, although this appears to be a separate effort apart from the upcoming “Azure” patch. It appears that they aim to release an Open Beta on Steam so players can access these multiplayer improvements early and help the dev team test out the functionality. They suggest that if you intend to play multiplayer, you should do so in the Open Beta version rather than the regular game version because it will be less slow.

We’re really excited about these upcoming improvements to the game and the new content. We will be sure to keep you updated as soon as we find out more information.