Rocket League combines both racing and soccer to offer many new, unique, and futuristic-based features, and that makes this game different from others.

A Complete Overview of the Awesome Rocket League Game Ever. If you are a game lover, especially sports games, you must have heard about the Rocket League. Rocket League is one of the most popular single and multiplayer vehicular soccer video games in the sports category.

The game was developed and published by Psyonix on July 7, 2015, for all platforms worldwide, including Windows, Play Station 4, Xbox One, Nintendo Switch, etc.

This game is specially designed for young people who want fun, racing speed, and soccer skills in one spot. In this game, your main goal is to fight many kinds of battles with the help of many new and fantastic cars.

Here are some exciting features of this game:

Rocket League gameplay is very simple and straightforward, and it won’t take you long to learn everything about the game.
There are two ways to play the game, which you can play as a team and individual. There are different rounds, each lasting 5 minutes.

In these 5 minutes, each player and team try to score as many goals as possible by hitting the big ball using the rocket-powered cars towards the opponent’s target field.

You can also use a charging pad to increase the car’s speed and power to make goals more efficiently and strategically, and you can jump in the air to hit the ball whenever needed.

The game also features a cross-platform feature, which means you can easily play with any of your friends or competitor regardless of the platform, whether it’s on Xbox or Windows, etc.

Also, instead of getting bored with the same sport, you can try different ice hockey and basketball modes.
Besides, the game has many features and highlights such as spins, short jumps, and quick dodges that you will know only when you play the game yourself.

Although Rocket League is a paid game, you need to spend money to buy it. But it was announced on September 23 that it is now available for free play, and anyone can download it from the Epic Games Store at no cost. 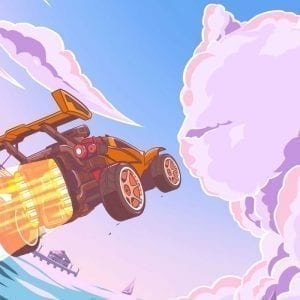 But here are some similar games:

Is Rocket League the Hardest Game?

This is not true. As we have discussed above, the gameplay of the Rocket League is very simple and straightforward. If you want to get high rankings and become an expert, it will take a lot of practice and time. All you need to do is fight your opponents and beat them with the right strategy. And if you do, you will be promoted to higher divisions. But keep in mind that every match you lose will affect your rankings, and you may be demoted.

It seems impossible to run a Rocket League on any low-end PC. You should check the above requirements, and if your system has these minimum requirements, you can try.

Is Rocket League Free On PC?

Earlier, the Rocket League was priced at $19.99, but now, fortunately, it is available for free across all the platforms, including PC. Follow the steps above to download it for free.

How Many Players Are Playing Rocket League?

The numbers are incredible, with about 40 million players from all over the world playing Rocket League. That is why this game has won many awards.

Will There Be A Rocket League 2?

According to the Rocket League’s official website, season two will come into action on December 9, 2020, with many new and unique features.