Bloons TD 6 – one of the coolest tower defense game

Bloons TD is one of the most popular series of tower defense mobile games that only Kingdom Rush can compete with. If you are a fan of those types of games take a closer look.

Bloons TD 6 is the last of the installments, which recently received a major update with a cooperative game mode.

So, now you can team up with three players and blow up balloons together. Everyone gets the same piece of map on which he can build turrets and place other defensive structures.

Also, there was a new map in the update, added cargo, and a new shell. It is interesting that initially the video game was created as a browser game, but then it was released on various platforms.

The game itself has in-game purchases. This project appeared on the Steam store in December 2018, and now you can buy it for $5.49

The next part of the Bloons TD series is in front of you. This bright and colorful tower defense game, despite the cartoonish graphics, will require gamers to calculate their actions and think strategically. 20 cards, 19 types of towers, three branches of upgrades, and more than 100 subspecies of various kinds of improvements – this can keep you busy for a long time.

The gameplay of the video game is simple and offers anything innovative for the video game industry. Bloons TD 6 is a continuation of the favorite strategy game, where the confrontation of monkeys and balloons awaits you again. In Bloons TD 6, gamers build towers and other structures to fight balloons. Also, there are various items for fighting aerial enemies: thorns or pineapples that explode. In short, this is a typical representative of the tower defense genre.

Bloons is one of many series of tower defense games on mobile, but for some reason, it is the most 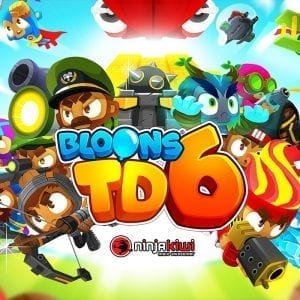 popular. Last year there was even information that it was the only one, except Minecraft, of course, a paid game in the list of the 50 highest-grossing games.

Also, last year, an update was released for Bloons TD 6, which added a full-fledged co-op mode. It can be played by up to 4 players simultaneously.

In this mode, the screen is simply divided into a certain number of areas, and each player can only build towers on their half. Thus, the success of the completion of the level depends solely on cooperation. The main thing here is not to quarrel, taking an inexperienced partner in the game.

What will you need to do?

At all levels, you will pursue a single goal. You have to start building a fortress and equipping it. You also have to come up with various devices. With their help, not a single enemy will get inside your strong fortress. To create an excellent defense, you will need to master good and high-quality weapons, as well as the strongest army that can protect everyone around you from enemy attacks. After all the actions are taken, the game will need to improve all the characters.

It will only need to be done so that they become stronger and resistant to attack. Also, in this game project, you will need to get away from the balls that will fly from various sides. The toy contains an unreal number of cool locations. They will change just at a breakneck pace. The landscape in the game changes quickly, so you can adjust to the situation at any time during the battle with opponents.

The heroes of Bloons TD 6 have the use of non-conventional weapons. Most of them have superpowers. Using the acquired skills, you will be able to deliver opponents a large number of strong blows with different amplitudes.

Bloons TD 6 is a quality game where you can find something to do and spend your free time with benefit and interest. Cool unusual tasks will allow you to plunge headlong into the atmosphere of speed because your victory will depend on it. Do not give your victory to someone else’s player, try to win!