Few good video games let you mess around with dinosaurs, despite the numerous licensed Jurassic Park spin-offs in existence. Then you see the promotional art for Ark and see human avatars riding dinosaurs mounted with turrets and know that you've discovered something unique.

Ark: Survival Evolved is a highly divisive action-adventure game that lets its players do anything they want within its massive sandbox. There are some designated quests and an emphasis on survival – but the most enjoyment players usually have when they run into the online community and have fun experiences. It all sounds enjoyable on paper, but the execution of the concept is what really separates a game from failure – so how well does Ark bring its premise to life? Let’s find out.

Whether you want to work together with people or fight against them – anything is possible. But what sets Ark apart is the fact there are many different things to find and craft within its world, including dinosaurs. You can hunt down dinosaurs, and you can befriend dinosaurs; you can mount dinosaurs and take them to battle with guns and turrets. Some dinosaurs are so big that you can even build bases on them!

If the game were any more customizable and freer, we’d call it Minecraft. The number of things that you can do in the game makes it genre-defining as no other game lets you do everything that Ark does simultaneously, and if it does, you won’t find the same amount of polish that is important for it to be fun.

A Fleshed Out Single-Player Experience

When you hear about Ark, it’s almost always based on its multiplayer modes and what you can do in them. Something people often overlook is the game’s single-player mode, which surprisingly has a well-made story campaign that provides you hours of fun.

There are many different missions to be completed, and they usually take you through detailed caves that have artifacts and monsters to fight. Once you’re deep inside, you often run into a boss fight, and the creatures you encounter vary between giant spiders, dragons, and more. The boss fights aren’t simple AI-summoned enemies to kill either, as they take some strategizing and even summon smaller enemies to increase the difficulty. And if you die to any of them, you have to recollect your resources.

Once you beat all of those story missions, you are rewarded with a new dungeon that provides you with the game’s lore – which is a great touch and makes the journey feel all the more worth it.

The More The Merrier 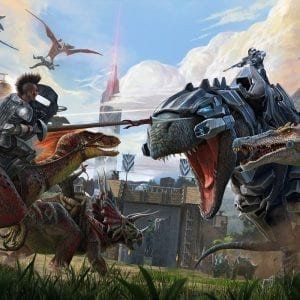 al Evolved’s multiplayer experience feels larger-than-life thanks to its diverse world and the ability to hold a hundred players in the same session. The experiences you have with other players in the game are very variable – as they can be frustrating, fun, normal, absurd, and sometimes even memorable. You never know who or what you’d run into, and the unpredictability both adds a sense of tension and a sense of reward, based on which way your situation goes.

You can make friends and form entire tribes with shared resources and bases, which is a great experience and acts as an encouragement to spend as much time playing the game as possible. Whereas on the other hand, there are looters, murderers, conmen, and pretty much every type of person in the community you can think of.

If a group of lunatics is not hunting you down, you might log back into your game to find your barricades and resources gone. These life-like details and possibilities within the gameplay truly make Ark feel like its own thing.

But if you wish to play the online mode without dealing with hostile players, there’s a PvE mode where you can’t harm each other. But when it comes to this game – the more unpredictable and filled with players, a server is, the better.

Rough Around The Edges

Despite the game offering you hundreds of hours of fun to be had, the experience may prove too frustrating to play for many people due to numerous reasons.

The first reason is optimization. It crashes too many times, has many different bugs, and doesn’t always provide the best performance despite your device’s capability. In the worst-case scenarios, it can even give your machine constant blue-screens. These issues are not limited to computers, as low frame-rates and bugs carry onto the console ports. The Nintendo Switch port is arguably the worst example as it offers the worst graphics and frames due to the console’s limitations.

The second reason is the game’s AI. While it’s generally functional enough, sometimes it can bug out or not work as well as it should, and the dinosaurs that are the game’s main appeal can become one of the reasons you get frustrated with it. Of course, it’s expected for a game of this scale to have such issues, but sometimes they appear more often than they should.

The third reason is that the game is incredibly grindy. And that is further made worse by the fact you can lose your resources. As mentioned earlier, if you play offline, you can lose your resources if you fail one of the story caves, and this includes losing the artifacts required to summon the bosses, which are mandatory for progression. Whereas in the online mode, you can lose your resources when other players raid you, and sometimes it even happens when you aren’t around. People usually tackle this issue by making their bases difficult to spot, but it does not always work as some are seasoned. Collecting and crafting your resources multiple times is just something that can be frustratingly repetitive.

Another important example is in the game’s dinosaur mechanics. If you have a large T-Rex and lays an egg – not only will it take hours to hatch, you will also need to move them around to balance their temperature constantly. Once they do hatch, they are still very demanding, and you frequently need to feed them and do other things. Of course, in the end, you have one of the strongest dinosaurs at your side, but the effort required is a bit too much for most players.

Lastly, the game lacks skill-based matchmaking, so if you enter a server without being strong or having sufficient resources – you will be dominated by higher-level players for a long time. If you run into too many aggressive players, then your progression will suffer much. And in an already grindy game, this can be off-putting enough for you to quit the game.
In the end, no game is without its fair share of issues, but not many games make you feel like quitting altogether.

A unique experience that treads the realm of dreams and nightmares

Ark: Survival Evolved is a game that perfectly fits the ‘different strokes for different folks’ statement. If the player finds themselves enjoying the experience, they will most likely have a great few hundred hours. But if a player finds it repetitive or frustrating – the changes won’t change anytime soon, and they need to find a different game.

One undeniable thing, though, is that this game offers an experience unlike any other. It combines the different genres seamlessly within the gameplay as if they were made for it. And, well, taking dinosaurs with machine-gun mods into battle is an itch only Ark can scratch.