On April 27th the current Classic PvP ARK season ended, and the new Conquest Season 3 of PvP launches. However, the gameplay mode has been broken by an unusual decision by the developers to remove aspects of strategy.

A few days ago, the developers announced that the Classic PvP Clusters A and B would merge to create a single cluster. And just yesterday, in another announcement, the studio indicated that the current season of Classic PvP would be ending, and on the same day, the new season of Conquest PvP will begin.

The end of season 2 of Classic PvP does not bring particularly that many changes, many of the same rules for the servers are the same (such as a max of 25 players in a tribe, or 100 max players in a server, etc.).

According to the announcement made by Studio Wildcard a few days ago, Conquest servers were wiped on April 27th at 10 am PST, and a new season begins. Conquest PvP servers are specifically focused on large-scale PvP by allowing tribes to establish quickly and rebuild easily after losses while also making reasonable limitations in place to keep tribes from getting too big.

Two fairly severe objects of criticism are removing cave building and adding a 24-hour cooldown on tribe slot re-use (meaning that if someone leaves your tribe, another player cannot take their place for 24 hours.)

For one thing, this arbitrary 24-hour limit makes it very difficult to recruit and can make the experience for players new to Conquest mode unnecessarily challenging. Defending your base will be exceptionally difficult because the only way it will work is if all 25 members of the tribe are very active players. You can get at least 10 online simultaneously (realistically, it may only be as little as 5). If you have a large number of inactive players in your tribe, then removing them from your tribe so you can invite currently active players to your tribe would make things a lot easier. Still, you can’t because you will have to wait an entire day before you can invite another player to the tribe. 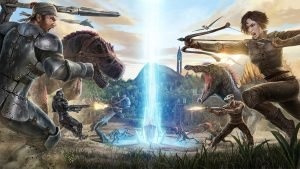 One way to mitigate having a base to defend with a small number of tribe members available during a raid would be to build one’s base in a cave. Oh, but now you can’t do that anymore! In the current state of Conquest PvP, big fights can easily be extremely unbalanced, with the potential that multiple (informally) allied tribes of well over 30 players could gang up on a tribe’s base that just happens to have a few members offline. It’s not a fair fight. It’s far easier and quicker to recruit a large tribe to attack a location and much more difficult and time-consuming to build up a tribe willing to commit to defending it. Formerly a cave base could allow for an outnumbered tribe to hold its own against a larger attacking force, but now that strategy has been completely removed.

One good bit of news is that the number of maps available to play on a Conquest PvP server is being expanded on May 7th to include Aberration, Extinction, Genesis I, and the Crystal Isles. Maps available at launch will include The Island, Scorched Earth, Ragnarok, Valguero, and The Center. Additionally, TEK dinos have been enabled for Conquest PvP servers. This appears to include the Tek Parasaur, Tek Quetzal, Tek Rex, Tek Rapto, and Tek Stego.

We’re pleased to see that ARK: Survival Evolved has new maps and dinos are being enabled for Conquest PvP. Still, so long as there is a 24-hour cooldown on tribe member rejoin, we will continue to feel somewhat disappointed by the apparent lack of care the developers have for the way this game mode is actually most commonly played.