Animal Crossing (AC) is a multiplayer life simulation franchise developed and published by Nintendo in 2001. The game is a global success that has sold over 40 million copies worldwide. There are five entries in the franchise, and the last one, New Horizons (NH), was published in 2020.

The first four installments of Animal Crossing are among the best selling for its consoles, but New Horizons became the second best selling on the Nintendo Switch within six weeks of release.

The spark for creating Animal Crossing started when the creator of the game, Katsuya Eguchi, moved to Kyoto after getting a job in Nintendo in 1986. There, Eguchi worked on several projects, including Super Mario Bros. 3. However, even though he eventually got to be the director for the SNES, he was lonely.

In an interview with the Edge magazine, Eguchi spoke about what initiated his idea for AC and revealed that he wanted to explore three themes: family, friendship, and community. When he arrived in Kyoto and experienced life far away from friends and family, he realized how significant it is to spend time with loved ones. The goal was to recreate that feeling, which is the impetus behind the original AC entry.

The game centers around a human character who leaves the safety of home and moves to an unfamiliar town. There he finds villagers of different species and anthropomorphic characteristics. Sometimes the player receives letters from their family on birthdays and holidays. Otherwise, they have to maneuver life on their own and find their place in the world.

Throughout the years, the plot of Animal Crossing doesn’t change much. It is the graphics quality, visuals, and characters that improve drastically. The game still allows you to introduce up to four players, and each of you will have their home and money. Thus, each of the characters can have their preferred way to play AC, making the experience more engaging.

The game provides a virtual surrogate-family thanks to the warm feelings and collaboration of everyone in the village. But there’s also an in-game message board system that allows family members to communicate. That comes from the creator’s wish to develop an experience that loved ones can share and nurture their communication. We played the latest entry in the franchise to discover whether developers managed to keep the same heartwarming feeling.

Animal Crossing: New Horizons – a gentle comfort and safety from the modern life

Even though the world has slowed down in the last eleven months due to the pandemic, there’s still so much noise, uncertainty, and overwhelming stress. We found that Animal Crossing: New Horizons (ACNH) is a dash of nirvana that gently takes us into its slow and peaceful realm.

The entry came at the right time, which also helped its sales immensely. Right after we found ourselves in the clutches of coronavirus, New Horizons opened the door of its world without disrupting the original premise.

The game starts with the raccoon twin brothers, Timmy and Tommy, discussing their trip to the deserted tropical island. Right after, you get to choose your name, character’s physical traits, and the hemisphere. That’s crucial because time in Animal Crossing is equivalent to the time flow in the real world. 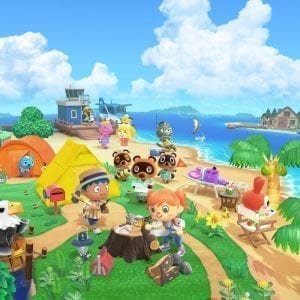 Once you decide the details, you get to move to the island with two random animal characters and start your adventure of helping the community. The goal is to provide the island with new resources and infrastructure, making it more sustainable and pleasant for all its inhabitants.

There are no moral dilemmas, perplexing missions, or adrenaline-fueled actions in any Animal Crossing entry, and one shouldn’t expect it in NH either. The highest value of the whole franchise is simplicity. The game wants you to live, contribute, and enjoy in a relaxed environment brimming with humor and captivating nature.

New Horizons centers the plot around growing the community and attracting more citizens. Communication also focuses on the island’s development, new residents, and their arrival. The entrepreneurial raccoon and the Resident Services building’s owner, Toom Nook, continuously talk about different strategies to increase the community.

The focus on making the most livable island possible is the only deviation from the previous entries. Even though New Horizons also consists of waking up, walking around the town, and befriending locals, digging for fossils, or catching bugs, there’s the objective of improving the living conditions and getting more inhabitants. The other four games didn’t have that objective, and there were no expectations to do anything specific.

But there’s still no pressure or sense of urgency in NH, and you can work and develop at your own pace. You are free to spend all day furnishing your living room or planting new veggies in the garden. The game gives you all the time of the world to complete your objectives. Hence, this entry kept the friendly essence of the original while taking the visuals to a new level. Every character, house, and item in NH is beyond detailed, making the island feel more alive.

Not for everyone, but ideal for those who don’t require gameplay full of action

Some people might wonder if Animal Crossing even deserves to be called a game. Others will see it as too slow, dull, or pointless. But those who don’t need psychological dramas, adrenaline, and puzzles will find the game to be rewarding and an ideal escape from all the buzz and stress of real life.

In New Horizons, you start with a tent only, and then you get to grow your home, the island, and community. All while doing whatever you like and relaxing your eyes and souls with soothing visuals and relaxing gameplay. We find Animal Crossing detailed, friendly, and warmhearted, with a premise that has much more to offer than one initially thinks.