Among Us: An exciting year in front of crewmates

Among Us is an online multiplayer social deduction game developed and published by Innersloth in 2018. The game is set in space, and it centers around eight to ten players preparing a spaceship for departure, but one of them is not who they claim to be. Instead, they’re an impostor ready to kill everyone else.

Although Among Us was first released on Android, iOS, and Windows in 2018, it was eventually published on Nintendo Switch, Xbox One, and Series X/S in 2020. That made all the difference. Better said, the pandemic and additional platforms helped the game become a hit. Once the lockdown and social distancing measures started, people had to find enough content and activities to keep them occupied.

It is when streamers on Amazon’s Twitch service thought that Among Us is an ideal quarantine game. As a result, they started streaming their contests. According to CNBC, the game was downloaded 42 million times on Steam in the first half of September and 84 million times on Android and iOs. Simple and fun gameplay also helped Among Us increase its popularity.

Among Us was created as a party game players can play online or using local WiFi. The goal is to complete necessary tasks for a spaceship departure or throw out imposters. Players have to react fast to prevent the intruder from sabotaging their objectives. But they also have to keep an eye on their crewmates by using the Admin Map and Security cameras. If a dead body appears, they have to discover who did it.

On the other side, the Imposter has to eliminate crewmembers and convince everyone it was one of the bystanders. They have to do whatever they can to ensure others believe they are one of them. Thus, they have to sabotage and divide crewmembers or kill those who are slowing down their intentions. 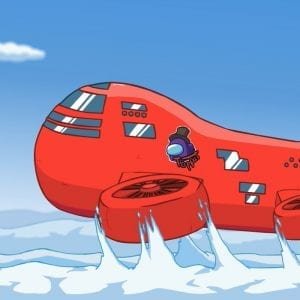 It is a similar concept to one of the Werewolves and Mafia: crewmates have to stay within three different maps, fulfill all the tasks and win. What makes the game more entertaining is that you can choose whether you’ll be an imposter or a crewmember. Whenever crewmates vote someone as the potential intruder, that player is thrown out of the map and into space.

However, it’s not the storyline that makes Among Us that engaging. It is more about the situations you’ll find yourself in, decisions you’ll have to make, and people you’ll play with.

But if you’re already familiar with the game, why you’re really here is to hear the newest updates and news. So, here it is!

The latest updates and news from Innersloth

Innersloth posted the latest update about the upcoming Airship map in the early January of 2021. As they first promised in December, it should come early in the year, and they used The Henry Stickmin Collection as inspiration, meaning that it will be a large map and players can expect novel rooms and tasks.

Hence, there will be a possibility to choose the room of the starting point, dressing up new costumes, and climb down ladders. The crucial fact is that Airship will be free, and if you’re curious about how it looks, you can see the trailer here:

But the devs have been busy, so you should also know that Among Us will be available with Xbox Game Pass for PC in 2021, and they also launched the game on the Epic Games Store. So, if you have an Epic Coupon, you can claim the All-In-One pack that encompasses all the pets and skins.

They also notified their beloved crewmates that they fixed Nintendo Switch bugs. Innersloth included some previously blocked words in the chat and allowed players to use the controller to scroll. But they also promised to add buying cosmetic items soon!

After expressing their gratitude for being awarded the Best Multiplayer and Best Mobile Awards, they also said they plan to make a public roadmap for 2021 to be more transparent about the updated and new features.

Finally, Innersloth explained why the updates are taking that long. As you may have assumed, it’s because they didn’t expect Among Us to become such a hit, and they weren’t ready for what came after.

They thought their work on the game is done, but it turned out they will have to work much more on it. It is why Innersloth spent two months restructuring, seeking new processes and external partners that could help them navigate the procedures and board.

In case you didn’t know, Among Us started as a work of three friends, and the fourth one joined after the game became a hit. But that still wasn’t enough, and they had to figure out how to simplify things. As everything got more complicated and demanding, Innersloth had to make their work more sustainable. Thus, additional platforms mean that they have to figure out how to go about the extra support and necessary certifications.

Also, don’t forget there are legal issues and time-consuming meetings the devs have to go through to provide us with the best possible game. That is why we can expect that 2021 will be an exciting year for About Us and that this is only the beginning of an impressive journey!