Age of Empires II: Can you rule an empire and leave your mark on history?

Age of Empires II is an RTS from Ensemble studios originally released in 1999. Forgotten Empires remastered the game in 2019. 22 years on and still viewed as one of the best. Read on to find out why.

Why was Age of Empires II remastered and re-released as the Definitive Edition? Because it’s awesome is the short answer.

The original Age of Empires II was released on PC, Mac, and Playstation 2. The Definitive Edition is available on PC through Xbox game pass and steam.

Age of Empires II wasn’t revolutionary in terms of features or graphics or anything like that. So why was it looked back on so fondly to the point where Microsoft, the publishers, wanted a remaster?

Well, there are likely a few reasons. It was one of the first RTS games to really cultivate that sense of achievement. There is something sublimely satisfying about mining basic minerals and turning those minerals into an empire. It gave a real sense of achievement. More than other RTS games at the time as their scale, in terms of time frame, was so much smaller.

It feels like more of an achievement to mine some stone, kill some wildlife and turn that into an empire rather than to turn credits into units. You could literally see every aspect of your hard work. Not just producing military units and sending them against the enemy and winning a battle. But creating infrastructure to house and feed your people. No game had done this like AoE before. It draws the player in and gives them a sense of responsibility as the “Emperor”.

Graphically the definitive edition has been, as you would expect, heavily overhauled. 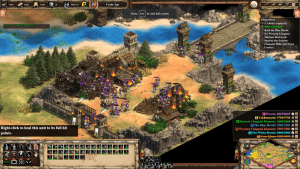 Structures now come crashing down as they are destroyed. Very cool.

Sound has also had a pass over with improved voice acting and a new soundtrack which adds gravity and a sense of scale.

Quality of life improvements in the definitive edition includes

And a host of other improvements. That brings the game up to standard when compared to today’s new RTS’s.

Formations don’t really have a use beyond making it easier to move numbers of units around as when the battle starts it’s a bit of a “fingers crossed” situation. Mayhem.

There is a zoom feature now but it’s not all that useful, to be honest. You can see what’s happening better in the heat of battle but issuing orders to one specific unit when there’s a battle going on around them will likely result in nothing as they’ll likely engage another unit before carrying out your order.

The UI has also had a revamp. Primarily just so that it “looks new” along with the rest of the graphical update but there’s also a nice quality of life update in there which now shows you how many workers you have allocated to collecting the different resources.

The AI in the game has received a significant improvement. In previous iterations, the AI actually had to cheat in order to remain competitive. But now you can expect a tough battle on a level playing field.

The AI will now utilize high-ground advantage. It knows how to place buildings defensively and which units to build in order to give you the hardest time based on your own army composition.

If you’re a competitive player this is hugely advantageous for you as you can watch replays back and see what tactics the AI used to beat you. Thus making you a better player.

For all the AI improvements however units do still manage to block each other and get stuck in terrain. Disappointing.

All single-player content from the original is present along with a bunch of new content. All the original campaigns and content are now bolstered by new civilizations, new campaigns, and new missions. In total the definitive edition boasts…

There are also an impressive amount of new game modes on offer and “art of war” challenges that pit you against the clock to achieve your goals.

Considering the core game is the same as it was 22 years ago there’s a surprising and welcome amount of variety when it comes to objectives in different missions. You may have to battle against a number of powerful established cities and all-out war may not be the best way to defeat them. You might have to capture established villages. You might have restrictions on the units you can build. Despite the huge amount of extra content, the devs have managed to keep things fresh.

Essentially the Age of Empires II Definitive Edition is what you would expect the game to be if it was released today. But do bear in mind, it IS the same game. So no new features, no fundamental gameplay changes, or new dynamics. It is a large-scale technical overhaul with some added content. It’s a further improvement on the HD edition released in 2013.

That’s not a bad thing. It’s certainly welcome, especially for fans of the series. The problem is that it leaves us wanting more. It raises the question. How good could an Age of Empires II game be if it was built from the ground up using today’s technology.